Interceptor and spy planes: Rattling of the Sabre


Fighter Aircraft intercepting and intimidating surveillance aircraft is nothing new.

Came across these videos on You-tube, showing how fighters intimidate surveillance aircraft:

and a Russian Tupolev Tu 95 Bear is intercepted by NATO Typhoons and Mirages:

A Russian military helicopter has crashed at an air show before thousands of spectators, killing one crew member and injuring another. 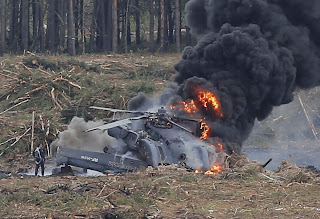 Video footage clearly show the tail rotor failing and the gunship starting to spin uncontrollably before hitting the ground in an uncontrolled crash-landing:

The commander of the Mi-28 helicopter was killed. The he aircraft crashed during an aerobatic display at the August 2 air show in the Russian region of Ryazan, 200 kilometers southeast of Moscow.

"The commander has died, the second pilot is alive. According to the second pilot, equipment failure caused the accident," the head of the Russian Air Forces, Colonel General Viktor Bondarev, was quoted by the RIA Novosti news agency as saying.

No spectators were injured, and the event was suspended for the day following the accident.

Russia's air force has used the Soviet-designed Mi-28 since the mid-2000s, and the aircraft is also exported to numerous countries, including Iraq.

Bondarev has grounded the country's Mi-28 fleet pending an investigation. The surviving crewmember who ejected, reports that hydraulic failure was to blame. This is the 4th crash of an Mi-28 due to hydraulic or gearbox failure.