The pilot of a Boeing 747 jumbo jet mistakenly landed at a small Kansas airport not far from the Air Force base where it was supposed to deliver parts for the company's new 787 Dreamliner. 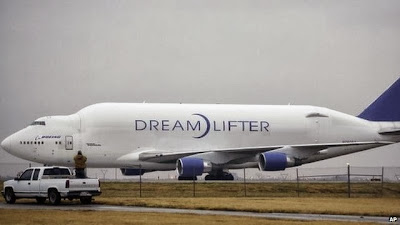 The 747 intended to touch down at McConnell Air Force Base in Wichita, which is next to a company that makes large sections of the 787.

Hours later, the jet took off again and was expected to land at its original destination.

The plane landed in an area where there are three airports with similar runway configurations: the Air Force base, the Jabara airfield and a third facility in between called Beech Airport.

Boeing owns the plane, but it's operated by Atlas Air Worldwide Holdings, a New York-based cargo-hauler that also provides crews or planes to companies that need them.

"We are working with Atlas Air to determine the circumstances," Boeing said in a written statement.

The Federal Aviation Administration planned to investigate whether the pilot followed controllers' instructions or violated any federal regulations.

The pilot sounds confused in his exchanges with air traffic control, according to audio provided by LiveATC.net.

"We just landed at the other airport," the pilot tells controllers shortly after the landing.

Once the pilot says they're at the wrong airport, two different controllers jump in to confirm that the plane is safely on the ground and fully stopped.

The pilot and controllers then go back and forth trying to figure out which airport the plane is at. At one point, a controller reads to the pilot the co-ordinates where he sees the plane on radar. When the pilot reads the coordinates back, he mixes up "east" and "west."

"Sorry about that, couldn't read my handwriting," the pilot says.

A few moments later, the pilot says he thinks he knows where they are. He then asks how many airports there are to the south of McConnell. But the airports are north of McConnell.

"I'm sorry, I meant north," the pilot says when corrected. "I'm sorry. I'm looking at something else."

They finally agree on where the plane is after the pilot reports that a smaller plane, visible on the radar of air traffic control, has just flown overhead.

The modified 747 is one of a fleet of four that hauls parts around the world to make Boeing's 787 Dreamliner. The "Dreamlifter" is a 747-400 with its body expanded to hold whole fuselage sections and other large parts. If a regular 747 with its bulbous double-decker nose looks like a snake, the bulbous Dreamlifter looks like a snake that swallowed a rat.

According to flight-tracking service FlightAware, this particular DreamLifter has been shuttling between Kansas and Italy, where the centre fuselage section and part of the tail of the 787 are made.

McConnell is next to Spirit AeroSystems, which also does extensive 787 work. The nearly finished sections are then shipped to Boeing plants in Everett, Washington, and North Charleston, South Carolina for assembly into finished airplanes. Boeing is on track to make 10 of them per month by the end of this year.

Because 787 sections are built all over the world - including wings made in Japan - the Dreamlifters are crucial to the 787's construction. Boeing says the Dreamlifter cuts delivery time down to one day from as many as 30 days.

Although rare, landings by large aircraft at smaller airports have happened from time to time.

In July last year, a cargo plane bound for MacDill Air Force base in Tampa, Florida, landed without incident at the small Peter O Knight Airport nearby. An investigation blamed confusion identifying airports in the area, and base officials introduced an updated landing procedure to mitigate future problems.

The following month, a Silver Airways pilot making one of the Florida airline's first flights to Bridgeport, West Virginia, mistakenly landed his Saab 340 at a tiny airport in nearby Fairmont.

The pilot touched down safely on a runway that was just under 3200 feet (975 meters) long and 75 feet (23 metres) wide - normally considered too small for the passenger plane.

After the attack on Rabaul harbour on the 2nd November a new threat developed for the landings on Bougainville. The Japanese had been careful to avoid exposing their ships to undue risk but they now felt compelled to bring in a force of seven heavy cruisers, one light cruiser and three destroyers. They were spotted refuelling in Rabaul and it was obvious they were set for an attack on the ships off Bougainville.

The U.S. had no capital ships near enough that would be able to challenge a force of this strength. In early 1943, Rabaul had been distant from the fighting. However, the Allied grand strategy in the South West Pacific Area—Operation Cartwheel—aimed to isolate Rabaul and reduce it by air raids. Japanese ground forces were already retreating in New Guinea and in the Solomon Islands, abandoning Guadalcanal, Kolombangara, New Georgia and Vella Lavella.

Rabaul—on the island of New Britain—was one of two major ports in the Australian Territory of New Guinea. It was the main Japanese naval base for the Solomon Islands campaign and New Guinea campaign. Simpson Harbor—captured from Australian forces in February 1942—was known as "the Pearl Harbor of the South Pacific" and was well defended by 367 anti-aircraft guns and five airfields.

Lakunai and Vunakanau airfields were prewar Australian strips. Lakunai had an all-weather runway of sand and volcanic ash, and Vunakanau was surfaced with concrete. Rapopo—14 mi (12 nmi; 23 km) to the southeast—became operational in December 1942 with concrete runways and extensive support and maintenance facilities. Tobera—completed in August 1943 halfway between Vunakanau and Rapopo—also had concrete strips. The four dromes had 166 protected revetments for bombers and 265 for fighters, with additional unprotected dispersal parking areas. The fifth airfield protecting Rabaul was Borpop airfield, completed in December 1942 across the St. Georges Channel on New Ireland.

The anti-aircraft defenses were well coordinated by army and naval units. The army operated 192 of the 367 antiaircraft guns and the navy 175. The naval guns guarded Simpson Harbor and its shipping and the three airfields of Tobera, Lakunai, and Vunakanau. The army units defended Rapopo airfield, supply dumps and army installations; and assisted the navy in defending Simpson Harbor. An effective early warning radar system provided 90 mi (78 nmi; 140 km) coverage from Rabaul, and extended coverage with additional radars on New Britain, New Ireland, and at Buka. These sets provided from 30–60 minutes early warning of an attack.

From 12 October 1943, as part of Operation Cartwheel, the U.S. Fifth Air Force, the Royal Australian Air Force and the Royal New Zealand Air Force—directed by the Allied air commander in the South West Pacific Area, General George Kenney—launched a sustained campaign of bombing against the airfields and port of Rabaul. After the first raid of 349 aircraft, bad weather blunted the effect of bombing, which saw only a single raid by 50 B-25 Mitchell medium bombers on 18 October. However sustained attacks resumed on 23 October and continued for six days, before culminating in the large raid of 2 November.

Nine squadrons of B-25s—totalling 72 bombers—and six squadrons of P-38 Lightning escorts attacked the anti-aircraft defenses and Simpson Harbor with minimum altitude strafing and bombing attacks. Eight B-25s were shot down by AAA or Japanese naval fighters, or crashed attempting to return to base. Among them was that of Major Raymond H. Wilkins of the 3rd Attack Group, posthumously awarded the Medal of Honor for his leadership. Nine of the 80 P-38s were also lost.

On Bouganville the Japanese had two airfields in the southern tip of the island, and another at the northernmost peninsula, with a fourth on Buki just across the northern passage. Instead of landing his forces near the Japanese airfields and taking them away against the bulk of the Japanese defenders, Admiral William Halsey landed his invasion force of 14,000 marines at Empress Augusta Bay, about halfway up the west coast of Bouganville. There he had his Seabees clear and build their own airfield. Two days after the landing Admiral Mineichi Koga sent a large cruiser force down from Japan to Rabaul in preparation for a night engagement against Halsey's screening force and supply ships in Empress Augusta Bay. The Japanese had been conserving their naval forces over the past year, but now committed a force of seven heavy cruisers, along with one light cruiser and four destroyers. At Rabaul the force refueled in preparation for the coming night battle.

Halsey had no surface forces anywhere near equivalent strength to oppose them. The battleships Washington and South Dakota and assorted cruisers had been transferred to the Central Pacific to support the upcoming invasion of Tarawa. Other than the destroyer screen for the transports, the only force Halsey had available were the carrier airgroups on Saratoga and Princeton. Rabaul was a heavily fortified port. With five airfields and extensive anti-aircraft batteries, the navy fliers considered it a hornet's nest. Up to that point in the war, other than the surprise raid at Pearl Harbor no mission against such a heavily defended target had ever been undertaken using carrier aircraft. It was a highly dangerous mission for the aircrews, and jeopardized the carriers as well. Halsey later said the threat the Japanese cruiser force at Rabaul posed to his landings at Bouganville was "the most desperate emergency that confronted me in my entire term as ComSoPac."

With the landing in the balance, Halsey sent his two carriers under the command of Rear-Admiral Frederick Sherman to steam north through the night to get into range of Rabaul, then launch a daybreak raid on the base. Approaching behind the cover of a weather front, Sherman launched all 97 of his available aircraft against Rabaul. Aircraft from Barakoma Airfield on recently captured Vella Lavella were sent out to intercept the task group and provide some measure of air cover. Back at Rabaul, the carrier force drove their attack home. Under orders to make preference of damaging more ships rather than sinking a few, the air strike was a stunning success, inflicting damage on most units of the cruiser force and neutralizing it as a threat. The daybreak bombing of Rabaul was followed up an hour later with a raid by 27 B-24 Liberator heavy bombers of the Fifth Air Force, escorted by 58 P-38s. Most of the Japanese warships returned to Truk the next day to receive repairs and get them out of range of further Allied airstrikes. A serious threat had been neutralized. 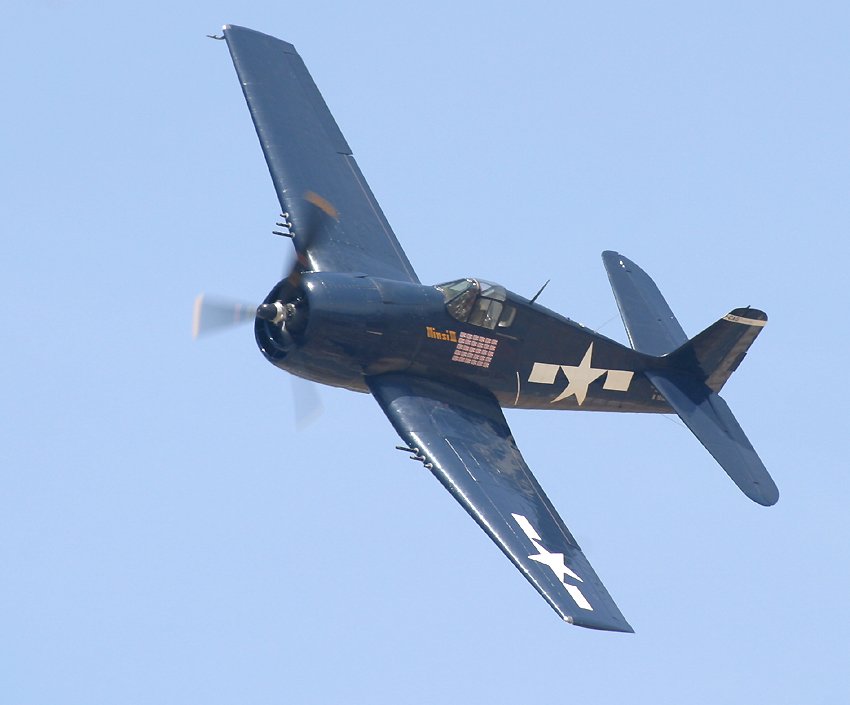 Saratoga was designed to carry 78 aircraft of various types, including 36 bombers, but these numbers increased once the Navy adopted the practice of tying up spare aircraft in the unused spaces at the top of the hangar. In 1936, her air group consisted of 18 Grumman F2F-1 and 18 Boeing F4B-4 fighters, plus an additional nine F2Fs in reserve. Offensive punch was provided by 20 Vought SBU Corsair dive bombers with 10 spare aircraft and 18 Great Lakes BG torpedo bombers with nine spares.

Damage to the Japanese forces at Rabaul were as follows:

Takao was hit by two 500 lb bombs, causing heavy damage and killing 23 crewmen. Chikuma, was slightly damaged by several near-misses. Agano was near-missed by one bomb which damaged one anti-aircraft gun and killed one crewman.  Three destroyers were also lightly damaged. Aircraft losses in the raid were light.

An additional carrier unit—Task Group 50.3 (TG 50.3) of the U.S. 5th Fleet—reached Halsey on 7 November. Commanded by Rear Adm. Alfred L. Montgomery, it consisted of the carriers Bunker Hill, Essex and Independence. Halsey used Montgomery's ships as well as TF 38 in a double carrier strike against Rabaul on 11 November. Sherman launched a strike from near Green Island, northwest of Bougainville, which attacked in bad weather at about 08:30. After its return, TF 38 retired to the south without being detected. Montgomery launched from the Solomon Sea 160 mi (140 nmi; 260 km) southeast of Rabaul.

Agano—which had remained at Rabaul after the 5 November strike—was torpedoed and heavily damaged in these attacks. The Japanese launched a series of counterattacks involving 120 aircraft against the U.S. carriers, but the force was intercepted and lost 35 planes without inflicting damage on Montgomery's ships.