Me 323 Gigant found off Sardinia

Reputedly the remains of a
Messerschmidt 323 Gigant Transport 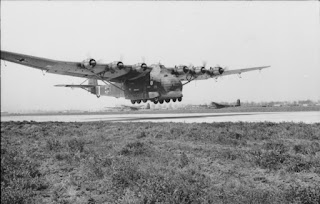 Italian researchers claim to have discovered the wreck of a Messerschmitt Me 323 Gigant heavy cargo/troop transport off the Sardinian coast. Only 200 Me 323 were built during the war and none has survived to this day, the only remnants of the type being a main spar owned by the Luftwaffenmuseum der Bundeswehr (German Air Force Museum), near Berlin.

The plane was reportedly shot down by a Bristol Beaufighter on 26 July 1943 as it left Sardinia for Pistoia in Italy. A few troops onboard the aircraft managed to evacuate the aircraft before it sank, but most passengers were trapped inside and drowned.
If the wreck does prove to be an Me 323, this would be a major discovery for aviation historians. Amateur historian and diver Cristina Freghieri claims she had been searching for the wreck for a year but had not expected to find it here. The wreck was discovered by using a wire-guided camera, and was then explored by a team of divers. The few seconds of footage that have been made available would tend to show the wreck is indeed an Me 323