So the Paris Airshow has started, minus attendance from the US Military and Airbus' A440M Grizzly/Atlas transport.The US did not attend due to budget cuts.

This has left Russia as the main military exhibitor to wow the crowds with their aircraft:

Russia’s Sukhoi has rocked the 50th Paris Air Show at Le Bourget with the premiere of its cutting-edge Su-35 fighter. Super-maneuverable even for a Sukhoi, the Su-35 has been dubbed the “UFO” for its outstanding maneuverability. 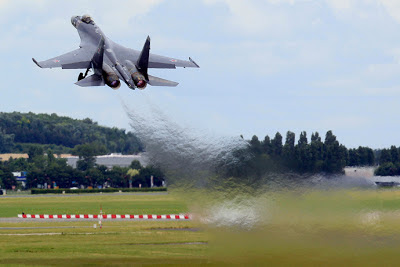 But the first demonstration flight of a Ka-52 has already been accompanied by a minor scandal, as the gunship was banned from its scheduled flight. Two Eurocopter Tiger helicopters performed in the program instead. 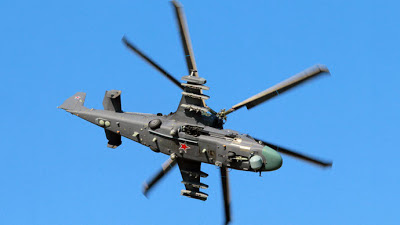 “The crew started the engine and began the taxing maneuver when it received the organizers' instruction to return to the static parking area and to stop the engine,” a Kamov spokesperson said.

A source in the Russian delegation said the "organizers explained this by the fact that the French prime minister was visiting the air show at the moment." The source said that if the European helicopters had flown after the Ka-52, they would have attracted less attention.

Later in the day, the Alligator finally made it to the skies, though the exhibition was already closing and many of the guests had already left the show. A demonstration flight of a Yak-130 trainer took place on schedule. 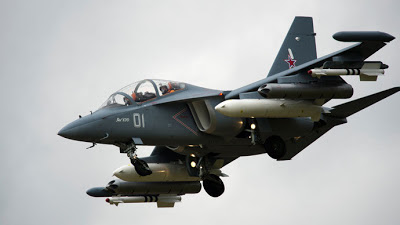 The airshow at the Le Bourget exhibition center takes place from June 17 to 23, and opens to the public on June 21. The event brings together over 3,000 aircraft manufacturers from 44 countries: 1,040 French, 350 American, 124 German and 115 Italian. Forty-six of these companies, including Sukhoi, are Russian.

Some 70 percent of the more than 140 aircraft being exhibited are civil, and the rest are military. Around 40 aircraft will give flight demonstrations.


Images gleaned off internet, not my work happy to credit owners on request. No copyright infringement intended .Just leave a comment. 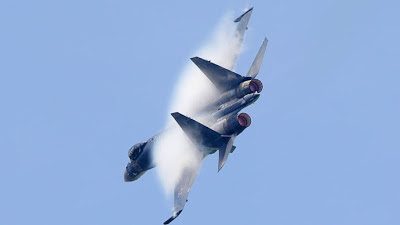 “The plane easily passes from low-speed super-maneuverability mode to high-speed combat flight,” test pilot Sergey Bogdan said. Bogdan will pilot all Su-35 flights at the Paris Air Show. The engines are so powerful that the plane could be pulled out of any complicated situation, like a spin, at pilot’s will, he explained: “All you need is to get with the plane on the same wave, to caress and stroke it because, you know, it is a living being.” 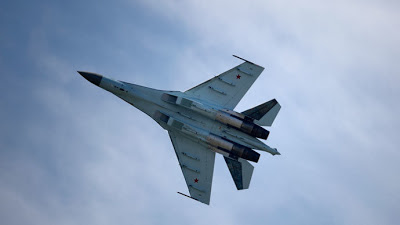 There will be little competition for the Su-35 at the Paris Air Show, primarily because sequestration in the US Military’s budget has left Le Bourget without any US Military airplanes present, either for displays or show flights. The Su-35 has become the first Russian fighter jet to take part in the Paris Air Show since 2001, while this is the first time 1991 the US has not presented a fighter jet at Le Bourget.

It has top speed of 2,400 km/h, a 3,600 kilometer range, an 18 kilometer ceiling, and an advanced radar system to detect large targets from as far as 400 kilometers.

Probably the only major feature that the Su-35 lacks - and which prevents it from being labeled fifth-generation - is limited stealth capability, as only some parts of its airframe are made of composite material. Nonetheless, it can detect stealth aircraft such as the US’s F-35 at a distance of over 90 kilometers.

The aircraft’s thrust/weight ratio is unique at a kilo of thrust per kilo of aircraft weight, thanks to a pair of brand new 117C jet engines. 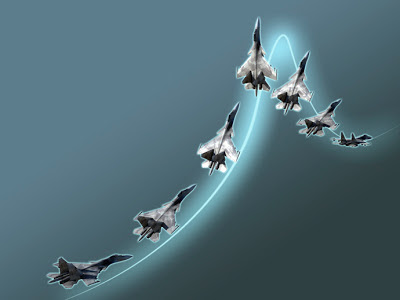 This enables Su-35 to perform all current maneuvres/ stunts, including Russian specialties such as Pugachev's Cobra, the Frolov Chakra, the Dead Leaf, and the unprecedented Pancake, which is an horizontal 360-degree made turn without losing speed. The Pancake is performed only by the Su-35. 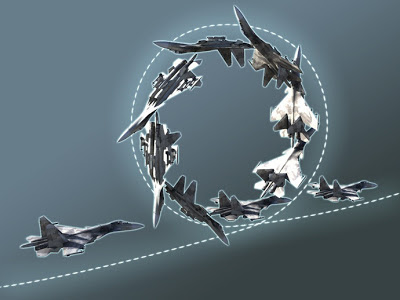 With these characteristics, the Su-35 surpasses practically all modern fighter jets such as France’s Rafale, Sweden’s Gripen, the Eurofighter 2000, and the modernized US F-15, F-16, and F-18. It is on a par with the fifth-generation US F-35 and F-22A, neither of which are currently on the market.

The Su-35 is generating so much interest that the airshow organizers have assigned it a spot right in the middle of the main avenue of the exhibition.

The first country to buy a Sukhoi Su-35 could be China, as Beijing is already in talks with the manufacturer: “We have signed an intergovernmental agreement on the supply of Su-35 planes to China," Aleksandr Mikheyev, deputy head of Russian arms corporation Rosoboronexport told reporters. 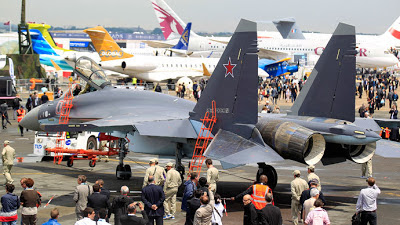 "As of today we have a legal base with China. An agreement on the protection of intellectual property has been signed," Mikheyev added. Beijing reportedly intends to buy 24 Su-35s, with a contract due to be signed by the end of 2013.

Airbus was forced to abandon the public debut of the A400M, the troop carrier running four years late and developed at a cost of more than €20bn (£17.6bn) for Britain, France, Germany and four other nations.
The flypast, scheduled for today, would have been one of the highlights of the week-long show but the gearbox problem in one of the huge turbo-props is the latest setback for a project plagued by delays and squabbles which have extended to a row over the name.

Airbus has nicknamed the plane "Grizzly" but an indignant RAF intends to call the aircraft Atlas to reflect its endurance capabilities when it makes its debut at Farnborough next month. Air Chief Marshall Sir Stephen Dalton has said "Grizzly" would be accepted "over my dead body." 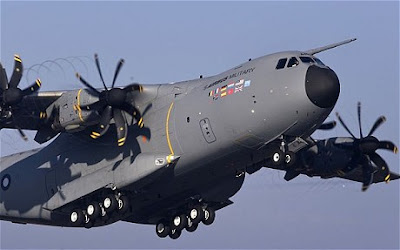 There are doubts about whether Atlas will be cleared for take off in time for the British air show following the discovery of the gearbox problem. Domingo Urena-Raso, Airbus Military chief executive, said that "flight test requirements are very demanding at the moment."

The long development delays have exasperated politicians and air forces while engineers have wrestled with the technical challenges posed by the advanced turbo-prop technology. The programme was on the brink of cancellation last year but Britain and other buyers reluctantly agreed to stump up another €3.5bn to get the plane into service.
at June 18, 2013