The Mustang and the SAAF did not meet for the first time in Korea. Early models of this British initiated, American built fighter, served with 5 Squadron in North Africa and Italy during the Second World War.The SAAf used the Mustang from 24 September 1944 when P-51B/C Mustang Is replaced Kittyhawks in 5 Sqn during the Italian campaign. P-51K Mustang IVa's, plus a few P-51D Mustang IV's were introduced later and 5 Sqn used the type extensively until is was disbanded in October 1945.
War broke out in Korea on 25 June 1950 and on 4 August 1950 the Union Government announced its intention to place an all volunteer squadron at the disposal of the United Nations.
When the South African Government comitted a squadron to the United Nations forces in Korea, 2 Squadron was selected to join the fray with Spitfires. This decision was rescindered, and it was decided to operate an aircraft which was already in the theatre, and for which full logistic support was already established. 2 Squadron joined the 18th Fighter-bomber Wing, flying P -51 Mustangs and later on F-86 Sabres. 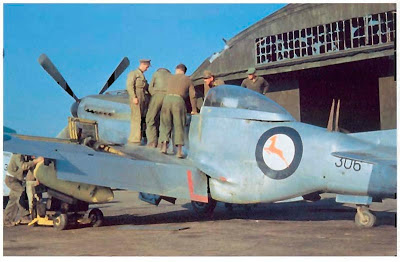 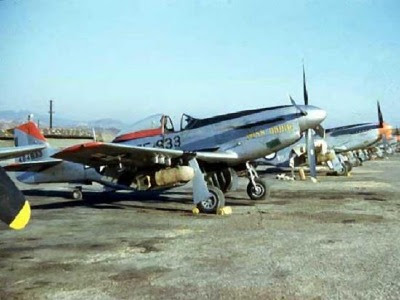 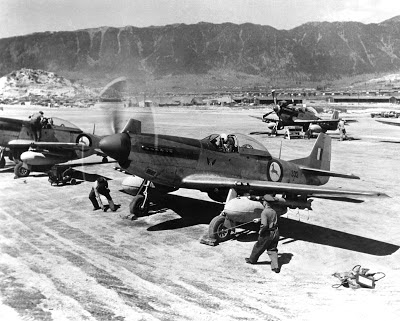 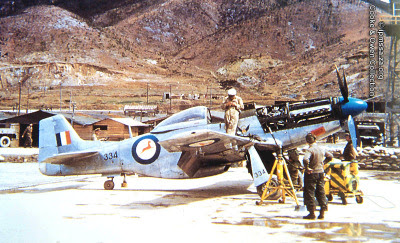 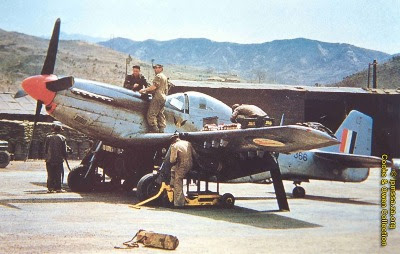 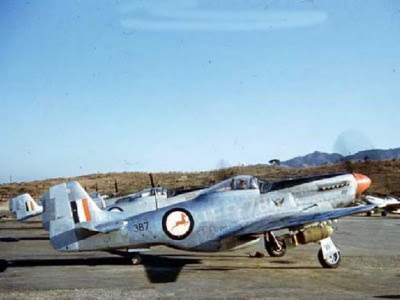 On 25 September 1950, 2 Squadron, the Flying Cheetahs, sailed for Japan. On arrival at Yokohama the squadron proceeded to Johnson Air Base near Tokyo where they completed their conversion and OTU on F-51D Mustangs supplied by the USAF. 2 Squadron served as one of the four squadrons of the USAF 18th Fighter-Bomber Wing and flew their first mission in Korea on 19 November 1950 from K-9 and K-24, Pyong Yang.

The SAAF flew with the distinctive Springbok in the centre of the roundel, introduced when 2 Squadron, was sent to Korea. Their role was close air support against enemy positions to soften them up for ground attacks, interdiction against the enemy's logistic and communication lines, providing protective cover for rescue operations, reconnaissance flights and to a lesser extent, interception of enemy aircraft. During the southward advance of the Chinese Communist forces these pilots attacked enemy troops, trucks and supplies daily in near zero temperatures. On 30 November the squadron moved to further south to K-13 from where they were evacuated further back to K-10, an airfield situated on the edge of the little bay close to the town of Chinhae. This was to be their permanent base for the next two years.

While equipped with Mustangs, the squadron flew 10 373 sorties and out of a total 95 Mustangs acquired, no fewer than 74 were lost due to enemy action and accidents. Twelve pilots were killed in action, 30 missing and four wounded.

In January 1953 the squadron received USAF F-86F Sabre jet fighter-bombers. Pilots and ground crew had to undergo courses in Japan to adapt to the aircraft. The first Sabre mission was flown on 16 March 1953. This marked the entry of the SAAF into a new era of jet warfare. Operating from K-55, the Flying Cheetahs took part in fighter sweeps along the Yalu and Chong-Chong rivers as well as ground targets. The squadron flew a total of 2 032 sorties in the Sabres. Only four Sabres were lost out of 22 supplied.

Once again the SAAF proved its worth. Serviceability in 2 Squadron was better than that of the other three USAF squadrons in the wing. The SAAF ground crew were volunteers and mostly WWII veterans, while the USAF ground crew were drafted to Korea. When there was a shortage of aircraft, three Mustangs that had been written off were cannibalised to make one. The work took a month and as the SAAF paid for aircraft issued, this aircraft was 'free' to the SAAF. 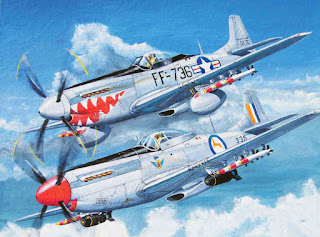 The war ended on 27 July 1953. 34 SAAF pilots had lost their lives and eight taken prisoner of war, including the future Chief of the Air Force, General D Earp. 74 Mustangs and 4 Sabres were lost. Prior to returning to South Africa, the Sabres were returned to the USAF.

In recognition of their association with the Flying Cheetahs, the OC of 18th Fighter-Bomber Wing issued a policy directive 'that all retreat ceremonies shall be preceded by the introductory bars of the South African national anthem. All personnel will render the honour to this anthem as our own'.
The SAAF Museum has been attempting to aquire examlples of important aircraft flown by the SAAF during its history, and one of the ex-Dominican F-51Ds was located in Florida, USA, in 1986 where the remaining aircraft had gone after resale. FAS1917 (c/n 122-38661_ was an F-51D-20-NA originally built as s/n 44-72202 and delivered to the USAAF on 9 January 1944. In 1945 it was delivered to the 8th Air Force in the United Kingdom but its unlikely to have seen combat.In March it was delivered to Flygvapnet (The Swedish Air Force) where it received the identity Fv. Nr.26112 and was operated by F16 Wing based at Uppsala. A total of 161 Mustangs were delivered to Sweden.On 31 October 1952 it was one of 42 Mustangs sold to Dominica and was accepted by the F.A.D on 1 January 1953. The aircraft saw considerable action against rebels who opposed the dictatorship of President Rafael Trujillo. Trujillo's son Ramfis was forbidden to become an operational pilot with the airforce. However in a flamboyant gesture of appeasement by Trujillo, the fighter squadron operating both F-51Ds and F-47 Thunderbolts was redesignated Esquadron de Caza Ramfis and later Grupo de Caza Ramfis. The Mustangs were periodically updated and overhauled by Trans Florida Aviation of Sarasota, California (which was later renamed Cavalier Aircraft Corp).Trujillo was assassinated on 31 May 1961, but in the years to come, unrest in Dominica continued, culminating in the Civil War of 1965, in which Mustangs played an active part. A further upgrade programme took place in 1967/68 by Cavalier Aircraft but htey remained essentially stock aircraft. Surviving longer than any other operational Mustangs, they were finally replaced by Cessna A-37Bs and the twelve survivors were sold to the USA 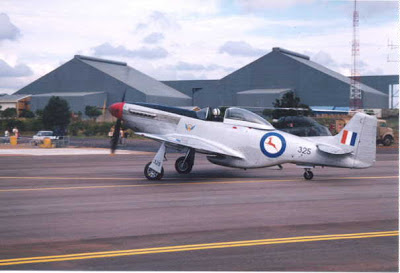 The SAAF Museum brought a Mustang in the USA in 1987, and when it was shipped to Cape Town where it arrived 14 November 1987. It was found to be corroded, and stripping commenced as soon as the crated aircraft arrived at Lanseria (the SAAF Museum base at that time). Bad luck, missing parts, stretched cables and lack of funds, have made its restoration a long and laborious task, but after 12 years the labour of love is complete and flying. It first took to the skies on 13th of October 1998The Museum Mustang bears the number 325. It is the third time a Mustang bears this number. The first 325 - named "PAPPASAN" - crashed in Korea, and instead of writing the aircraft off , the SAAF ground personnel rebuilt the aircraft from components salvaged from various wrecks. The resulting hybrid was again numbered 325, (PAPPASAN II) and was evidently the fastest Mustang in Korea.