A longer version of Boeing's Dreamliner made its first flight, passing a key milestone for a plane that should be more profitable both for Boeing to sell and for its customers to operate than the current production model.

Orders have been places by several carriers, Air New Zealand being the first, also Canada, Japan, KLM, Air France, Virgin, and others

The 787-9 jet, which left the ground at 11.02 am local time has room for 290 passengers, 40 more than the original 787-8 jetliner, and has about 300 more nautical miles (555km) of range.
That means Boeing can charge US$37.7 million ($45.8 million) more for the plane at list price, and airlines can sell more seats on longer routes.
Boeing has unfilled orders for 936 Dreamliners, worth about US$217 billion at list prices, or nearly eight years worth of production at its target construction rate of 10 per month, which it aims to hit by year's end.
About 41 per cent of the orders, or 388 planes, are for the 787-9. 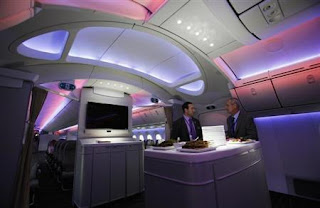 Boeing began selling an even longer version of the jet, the 787-10, in June. It has garnered 50 orders so far. The rest of the orders are for the 787-8.
In its maiden voyage on Tuesday, the 787-9 will fly for about five hours, running detailed tests of its flight controls, part of a nine-month testing program.
The aircraft used for the tests will eventually be delivered to Air New Zealand in mid-2014, Boeing said.

An hour behind schedule, in overcast weather, the jet rose smoothly before TV crews, reporters and thousands of Boeing employees, who watched from an adjacent runway. The flight began at Paine Field in Everett, Washington, near Boeing's main 787 assembly lines, and is due to end at Boeing Field south of Seattle, near Boeing's 737 factory.
The jet was scheduled to fly at a speed of up to 250 knots and altitude of 16,000 feet if the two test pilots aboard feel it is safe, Boeing said.
The jet will fly over Puget Sound and then head inland to Moses Lake, Washington.                                 (Reuters)
at September 18, 2013