Earlier this year, Pentagon Press Secretary George Little said that an IRIAF (Islamic Republic of Iran Air Force) F-4 Phantom combat plane attempted to intercept a U.S. MQ-1 drone flying in international airspace off Iran.
As we reported back then, one of the two F-4 Phantom jets came to about 16 miles from the UAV but broke off pursuit after they were broadcast a warning message by two American planes escorting the Predator. 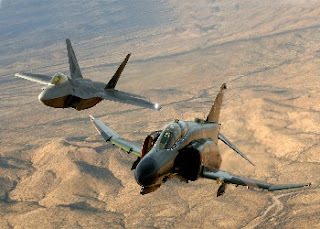 The episode happened in March 2013, few months after a two Sukhoi Su-25 attack planes operated by the Pasdaran (informal name of the IRGC – the Army of the Guardians of the Islamic Revolution) attempted to shoot down an American MQ-1 flying a routine surveillance flight in international airspace some 16 miles off Iran, the interception of the unmanned aircraft failed.

After this attempted interception the Pentagon decided to escort the drones involved in ISR (intelligence surveillance reconnaissance)  missions with fighter jets (either F-18 Hornets with the CVW 9 embarked on the USS John C. Stennis whose Carrier Strike Group is currently in the U.S. 5th Fleet area of responsibility or F-22 Raptors like those deployed to Al Dhafra in the UAE.

Airshow image of relative size (F 4 in the lead)

New details about the episode were recently disclosed by Chief of Staff Gen. Mark Welsh who on Sept. 17 not only confirmed that the fighter jets providing HVAAE (High Value Air Asset Escort) were F-22 stealth fighters but also said that:

“He [the Raptor pilot] flew under their aircraft [the F-4s] to check out their weapons load without them knowing that he was there, and then pulled up on their left wing and then called them and said ‘you really ought to go home’”

If the episode went exactly as Welsh described it, it was something more similar to Maverick’s close encouter with Russian Mig-28s in Top Gun movie than a standard interception.

It would be interesting to know how the Raptor managed to remain stealth (did they use their radar? were they vectored by an AWACS? etc.) and why it was not the E-2 most probably providing Airborne Early Warning in the area to broadcast the message to persuade the F-4 to pursuit the drone before the Iranian Phantoms and the U.S. Raptors got too close in a potentially dangerous and tense situation?

Anyway the U.S. pilot achieved to scare the Iranian pilots off and save the drone. A happy ending worthy of an action movie.

Ironic that the Iranians were flying US built aircraft that  supplied to the Shah's regime before the Islamist revolution. F- 22 on F4s. No chance. I would also go home! Low vs High capability Aircraft. F 4's not even on the list!