Origin of the Mirage III

The Mirage III family grew out of French government studies started in 1952 that led in early 1953 to a specification for a lightweight, all-weather interceptor capable of climbing to 18,000 m (59,040 ft) in six minutes and able to reach Mach 1.3 in level flight.

Dassault's response to the specification was the Mystère-Delta 550, (above) a diminutive and sleek jet that was to be powered by twin Armstrong Siddeley MD30R Viper after-burning turbojets, each with thrust of 9.61 kN (2,160 lbf). A SEPR liquid-fuel rocket motor was to provide additional burst thrust of 14.7 kN (3,300 lbf). The aircraft had a tailless delta configuration, with a 5% chord (ratio of airfoil thickness to length) and 60 degree sweep.
After some redesign, reduction of the fin to more rational size, installation of afterburners and rocket motor, and renaming to Mirage I, in late 1955, the prototype attained Mach 1.3 in level flight without rocket assist, and Mach 1.6 with the rocket. Dassault then considered a somewhat bigger version, the Mirage II, with a pair of Turbomeca Gabizo turbojets, but no aircraft of this configuration was ever built. The Mirage II was bypassed for a much more ambitious design that was 30% heavier than the Mirage I and was powered by the new SNECMA Atar after-burning turbojet with thrust of 43.2 kN (9,700 lbf). The Atar was an axial flow turbojet, derived from the German World War II BMW 003 design.However, the small size of the Mirage I restricted its armament to a single air-to-air missile, and even before this time it had been prudently decided the aircraft was simply too tiny to carry a useful armament load. After trials, the Mirage I prototype was eventually scrapped.
The new fighter design was named the Mirage III. It incorporated the new area ruling concept, where changes to the cross section of an aircraft were made as gradual as possible, resulting in the famous "wasp waist" configuration of many supersonic fighters. Like the Mirage I, the Mirage III had provision for a SEPR rocket engine.

Relative size and footprint
The success of the Mirage III prototype resulted in an order for 10 pre-production Mirage IIIAs. These were almost two meters longer than the Mirage III prototype, had a wing with 17.3% more area, a chord reduced to 4.5%, and an Atar 09B turbojet with after-burning thrust of 58.9 kN (13,230 lbf). The SEPR rocket engine was retained, and the aircraft were fitted with Thomson-CSF Cyrano Ibis air intercept radar, operational avionics, and a drag chute to shorten landing roll. The prototype Mirage III flew on 17 November 1956, and attained a speed of Mach 1.52 on its tenth flight. The prototype was then fitted with manually operated intake half-cone shock diffusers, known as souris ("mice"), which were moved forward as speed increased to reduce inlet turbulence. The Mirage III attained a speed of Mach 1.8 in September 1957.
The first Mirage IIIA flew in May 1958, and eventually was clocked at Mach 2.2, making it the first European aircraft to exceed Mach 2 in level flight. The tenth IIIA was rolled out in December 1959. One was fitted with a Rolls-Royce Avon 67 engine with thrust of 71.1 kN (16,000 lbf) as a test model for Australian evaluation, with the name "Mirage IIIO". This variant flew in February 1961, but the Avon powerplant was not adopted.

French Mirage IIICs
The first major production model of the Mirage series, the Mirage IIIC, first flew in October 1960. The IIIC was largely similar to the IIIA, though a little under a half meter longer and brought up to full operational fit. The IIIC was a single-seat interceptor, with an Atar 09B turbojet engine, featuring an "eyelet" style variable exhaust.

The Mirage IIIC was armed with twin 30 mm DEFA revolver-type cannon, fitted in the belly with the gun ports under the air intake. Early Mirage IIIC production had three stores pylons, one under the fuselage and one under each wing, but another outboard pylon was quickly added to each wing, for a total of five. The outboard pylon was intended to carry an AIM-9 Sidewinder air-to-air missile, later replaced by the Matra Magic.
Although provision for the rocket engine was retained, by this time the day of the high-altitude bomber seemed to be over, and the SEPR rocket engine was rarely or never fitted in practice. In the first place, it required removal of the aircraft's cannon, and in the second, apparently it had a reputation for setting the aircraft on fire !
The space for the rocket engine was used for additional fuel, and the rocket nozzle was replaced by a ventral fin at first, and an airfield arresting assembly later.
A total of 95 Mirage IIICs were obtained by the French Air Force (Armée de l'Air, AdA ), with initial operational deliveries in July 1961. The Mirage IIIC remained in service with the AdA until 1988.
The Armée de l'Air also ordered a two-seat Mirage IIIB operational trainer, which first flew in October 1959. The fuselage was stretched about a meter (3 ft 3.5 in) and both cannons were removed to accommodate the second seat. The IIIB had no radar, and provision for the SEPR rocket was deleted, although it could carry external stores.
The AdA ordered 63 Mirage IIIBs (including the prototype), including five Mirage IIIB-1trials aircraft, ten Mirage IIIB-2(RV) in-flight refueling trainers with dummy nose probes, used for training Mirage IVA bomber pilots, and 20 Mirage IIIBEs, with the engine and some other features of the multi role Mirage IIIE. One Mirage IIIB was fitted with a fly-by-wire flight control system in the mid-1970s and re-designated Mirage IIIB-SV (Stabilité Variable); this aircraft was used as a test bed for the system in the later Mirage 2000. While the Mirage IIIC was being put into production, Dassault was also considering a multi role/strike variant of the aircraft, which eventually materialized as the Mirage IIIE. The first of three prototypes flew on 1 April 1961.
The Mirage IIIE differed from the IIIC interceptor most obviously in having a 30 cm (11.8 in) forward fuselage extension to increase the size of the avionics bay behind the cockpit. The stretch also helped increase fuel capacity, as the Mirage IIIC had marginal range and improvements were needed. The stretch was small and hard to notice, but the clue is that the bottom edge of the canopy on a Mirage IIIE ends directly above the top lip of the air intake, while on the IIIC it ends visibly back of the lip.
Many Mirage IIIE variants were also fitted with a Marconi continuous-wave Doppler navigation radar radome on the bottom of the fuselage, under the cockpit. However, while no IIICs had this feature, it was not universal on all variants of the IIIE. A similar inconsistent variation in Mirage fighter versions was the presence or absence of an HF antenna that was fitted as a forward extension to the vertical tailplane. On some Mirages, the leading edge of the tailplane was a straight line, while on those with the HF antenna the leading edge had a sloping extension forward. The extension appears to have been generally standard on production Mirage IIIAs and Mirage IIICs, but only appeared in some of the export versions of the Mirage IIIE.
The IIIE featured Thomson-CSF Cyrano II dual mode air / ground radar; a radar warning receiver (RWR) system with the antennas mounted in the vertical tailplane; and an Atar 09C engine, with a petal-style variable exhaust.
The first production Mirage IIIE was delivered to the AdA in January 1964, and a total of 192 were eventually delivered to that service.
Total production of the Mirage IIIE, including exports, was substantially larger than that of the Mirage IIIC, including exports, totaling 523 aircraft. In the mid-1960s one Mirage IIIE was fitted with the improved SNECMA Atar 09K-6 turbojet for trials, and given the confusing designation of Mirage IIIC2.

Some export customers obtained the Mirage IIIB, with designations only changed to provide a country code. Such as the Mirage IIIDA for Argentina, Mirage IIIDBR and Mirage IIIDBR-2 for Brazil. Mirage IIIBJ for Israel, Mirage IIIDL for Lebanon, Mirage IIIDP for Pakistan, Mirage IIIBZ and Mirage IIIDZ and Mirage IIID2Z for South Africa, Mirage IIIDE for Spain and Mirage IIIDV for Venezuela.
After the outstanding Israeli success with the Mirage IIIC, scoring kills against Syrian Mikoyan-Gurevich MiG-17s and MiG-21 aircraft and then achieving a formidable victory against Egypt, Jordan, and Syria in the Six-Day War of June 1967, the Mirage III's reputation was greatly enhanced. The "combat-proven" image and relatively low cost made it a popular export success.
The aircraft remained a formidable weapon in the hands of Pakistan Air force in No. 5 Squadron (Pakistan Air Force), which was fully operational by the 1971 War. Flying out from Sargodha, along with a detachment in Mianwali, these were extensively used for ground attacks. No Mirage was lost in the war. PAF defined their own work package for major Depot level & Overhaul making them world's experts on the Mirage classic. The Mirage fleet is currently being modified to accommodate Aerial Refueling and to carry Hatf-VIII (Ra'ad) cruise missiles. In wake of delays from JF-17 Thunder, Mirages continue to play a major part in the defense of Pakistan airspace through Pakistani's Engineers ingenuity and engineering skills. 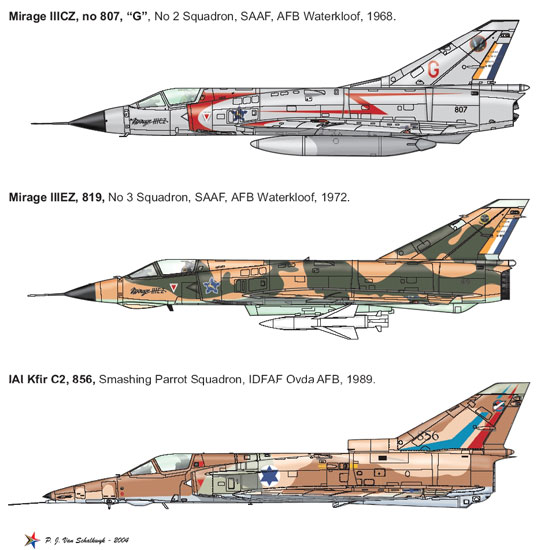 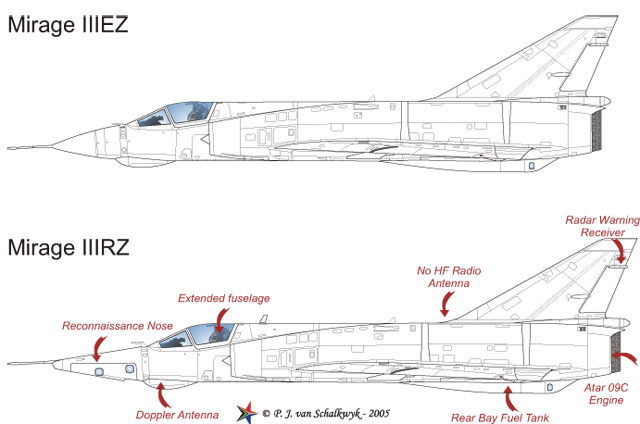 Difference between EZ and RZ variants