Steve Scheckter recently placed a photo of a replica/model Ju87 on Facebook, apparently flying over European  countryside. I guessed it was a Photoshop picture, as I'm reasonably sure there are no airworthy Ju 87 in the world. Well, then again, that was also said of the Mosquito, so I did a bit of research on the history and current facts, and came up with this:

The Junkers Ju 87 or Stuka (from Sturzkampfflugzeug, "dive bomber") was a two-man (pilot and rear gunner) German dive bomber and ground-attack aircraft. Designed by Hermann Pohlmann, the Stuka first flew in 1935 and made its combat debut in 1936 as part of the Luftwaffe's Condor Legion during the Spanish Civil War. 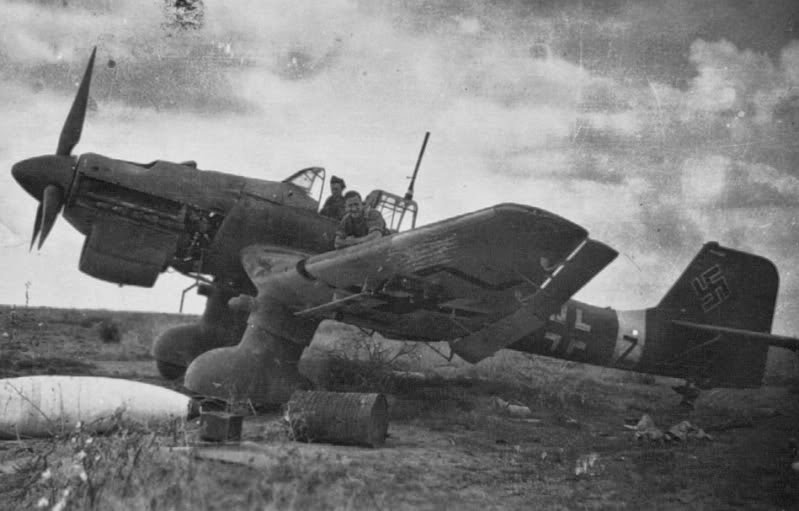 The aircraft was easily recognisable by its inverted gull wings and fixed spatted undercarriage, upon the leading edges of its faired main gear legs were mounted the Jericho-Trompete ("Jericho Trumpet") wailing sirens, becoming the propaganda symbol of German air power and the blitzkrieg victories of 1939–1942. The Stuka's design included several innovative features, including automatic pull-up dive brakes under both wings to ensure that the aircraft recovered from its attack dive even if the pilot blacked out from the high acceleration.

Although sturdy, accurate, and very effective against ground targets, the Ju 87, like many other dive bombers of the war, was vulnerable to modern fighter aircraft. Its flaws became apparent during the Battle of Britain; poor manoeuvrability and a lack of both speed and defensive armament meant that the Stuka required heavy fighter escort to operate effectively.

The Stuka operated with further success after the Battle of Britain, and its potency as a precision ground-attack aircraft became valuable to German forces in the Balkans Campaign, the African and Mediterranean theaters and the early stages of the Eastern Front campaigns where Soviet fighter resistance was disorganised and in short supply.

Once the Luftwaffe lost air superiority on all fronts, the Ju 87 once again became an easy target for enemy fighter aircraft. In spite of this, because there was no better replacement, the type continued to be produced until 1944. By the end of the conflict, the Stuka had been largely replaced by ground-attack versions of the Focke-Wulf Fw 190, but was still in use until the last days of the war. An estimated 6,500 Ju 87s of all versions were built between 1936 and August 1944.

Some notable airmen flew the Ju 87. Oberst Hans-Ulrich Rudel was the most successful Stuka ace and the most highly decorated German serviceman of the Second World War. The vast majority of German ground attack aces flew this aircraft at some point in their careers. 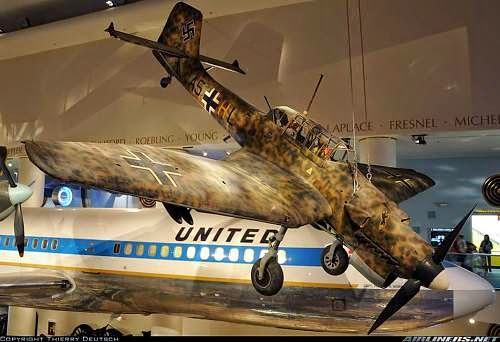 This aircraft is displayed in the Chicago Museum of Science and Industry. It was abandoned in North Africa and found by British forces in 1941. The Ju 87 was donated by the British government and sent to the USA during the war. It was fully restored in 1974 by the EAA of Wisconsin. 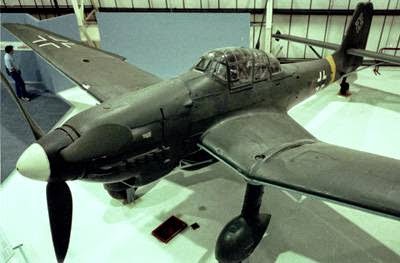 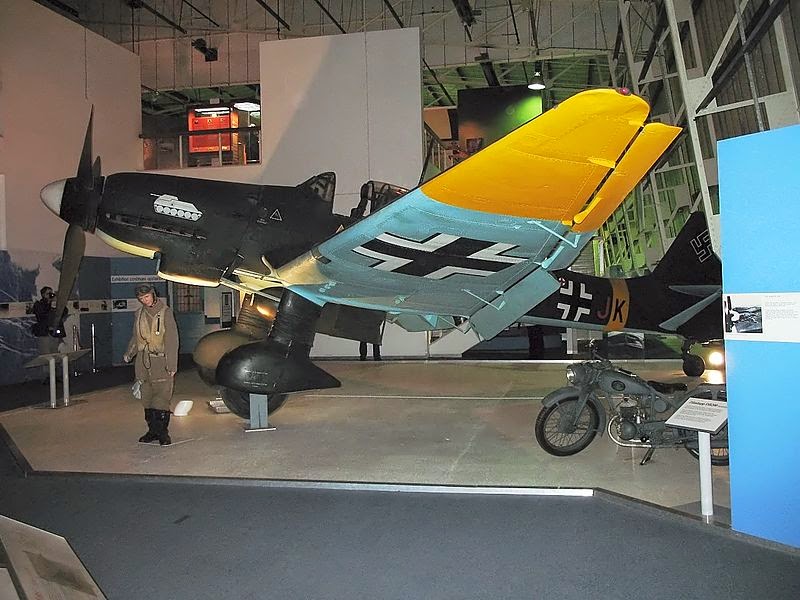 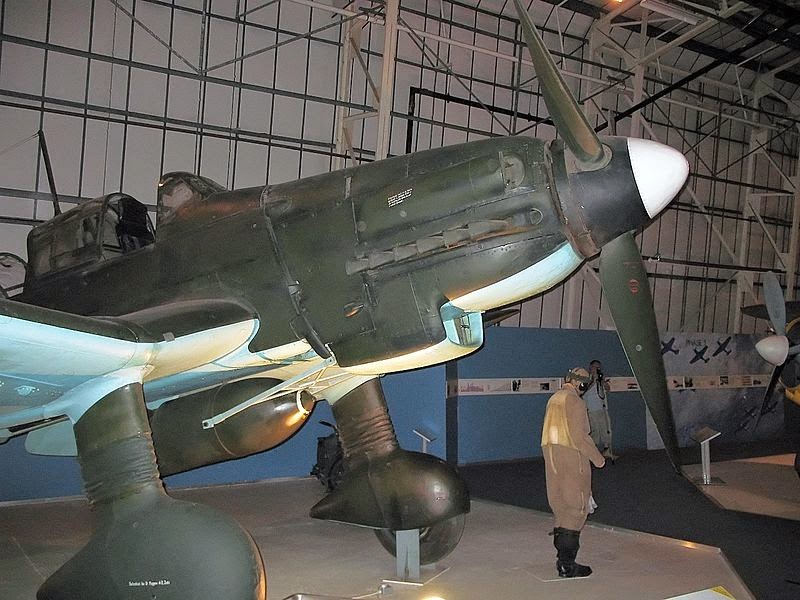 A later, ground-attack variant, this is displayed at the Royal Air Force Museum in London; it was captured by British troops in Germany in 1945. It is thought to have been built in 1943–1944 as a D-5 before being rebuilt as a G-2 variant, possibly by fitting G-2 outer wings to a D-5 air frame. After the war, it was one of 12 captured German aircraft selected by the British for museum preservation.

In 1967, permission was given to use the aircraft in the film Battle of Britain and it was repainted and modified to resemble a 1940 variant of the Ju 87. The engine was found to be in excellent condition and there was little difficulty in starting it, but returning the aircraft to airworthiness was considered too costly (and risky)  for the filmmakers, and ultimately, models were used in the film to represent Stukas. (see below)

In 1998, the film modifications were removed, and the aircraft returned to the original G-2 configuration.

Junkers Ju 87 R-2 Werk Nr. 0875709 is owned by Paul Allen's Flying Heritage Collection (FHC) and is believed to be under a long-term restoration to fly. It served bearing the Stammkennzeichen of LI+KU with 1./St.G.5, and was recovered to the United Kingdom in 1998 before being sold to the FHC. It is likely to be the best candidate for an airworthy restoration.

Other aircraft survive as wreckage, recovered from crash sites.

1. The Deutsches Technikmuseum in Berlin has the wreckage of two complete aircraft that were recovered from separate crash sites near Murmansk in 1990 and 1994.

These wrecks were purchased from New Zealand collector Tim Wallis, who originally planned for the remains to be restored to airworthy, in 1996.

The Sinsheim Auto & Technik Museum displays the remains of an aircraft that crashed near Saint-Tropez in 1944 and was raised from the seabed in 1989. 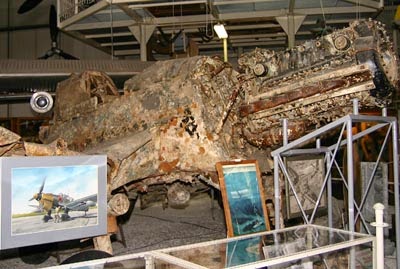 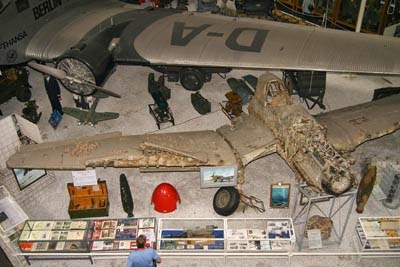 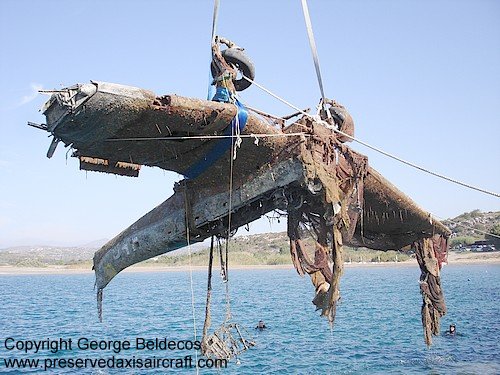 More on the history of this aircraft:

According to a combination of available historical data, it appears that the aircraft is most probably S7+GM (100375), crewed by Lt. Rolf Metzger & Uffz. Hans Sopnemann - both MIA), which was shot down on 9 October 1943.

The Hellenic Air Force web-site tells us this about this aircraft:
"On that very day the II/St.G. 3 lost a total of nine Ju 87D-3/Trop when they were intercepted during their mission against Royal Navy and Hellenic Navy ships in the Aegean. Of these nine, seven crashed into the sea and two made emergency landings on Rodos. A week before, German troops had landed on the island of Kos, which fell the next day. On 9 October 1943, HMS cruiser "Carlisle" and other destroyers, returning from a sweep west of Kos, were dive-bombed SW of Rodos Island by a formation of Ju-87 Stukas. "Carlisle" was seriously damaged and HMS destroyer "Panther" was sunk. Most of her crew were saved by the RHN destroyer "Miaoulis", which has also claimed firing against the Ju-87 formation and probably hit a couple of them."

5. The fuseage of a Junkers Ju 88 was raised 6 miles off the coast of the German Island of Rügen in June 2012, the team of German Army researchers having thought it to be a Stuka. The two Junkers planes shared several parts, including the engines, and from the way it sat in the seabed it reportedly appeared to have been a Ju 87.

During the filming of 'The Battle of Britain' in 1968, serious thought was given to using the Hendon Stuka for the Ventnor radar bombing scenes. At the time the Stuka was part of the Air Historic Branch's collection of German aircraft, and it was decided by them that the Ju 87 was too valuble to risk (It was unique at that point).

The cost of getting the aircraft airworthy would have been prohibitive, but they did get the engine running, and this was recorded for use on the films soundtrack. Next they bought 4 Percival Procters for conversion to 'lookalikes'. The work was carried out by Viv Bellamy and entailed a major redesign of the cockpit glazing, new rectangular tail plane, rear fuselage cut down and new centre section built to pass for the distinctive Stuka cranked wing. 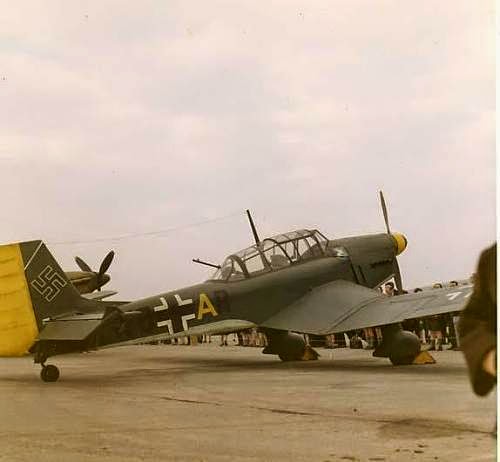 The conversion was pretty convincing but, when flight tested by Bellamy, they did not fly well and were not used for filming. Their places were taken by large-scale radio controlled models which bombed the Ventnor film set constructed at The Mound near Dover.

The full-size replica Stuka built by Lester Hope and his team of dedicated volunteers for Classic Fighters, was moved to its new location outside the Omaka Aviation Heritage Centrey. Here it joins its contemporary adversary, the replica Hawker Hurricane. 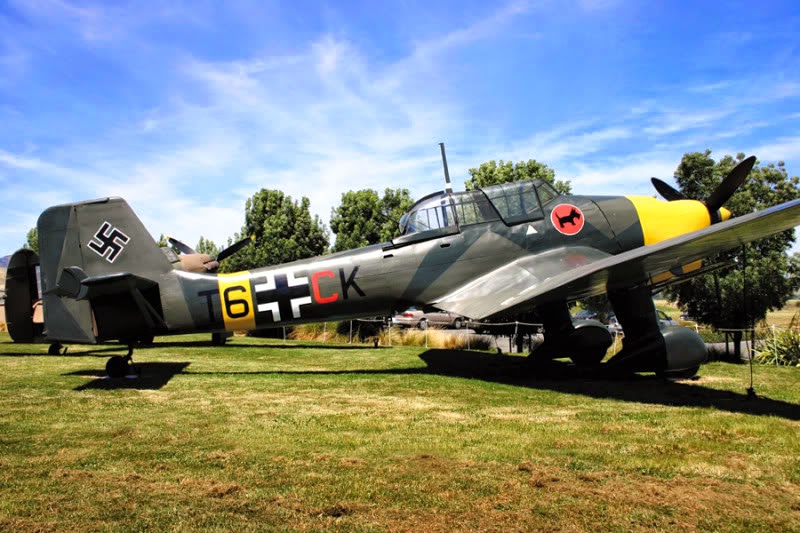 Ukranian scaled down  flying replica, one of many in the world. 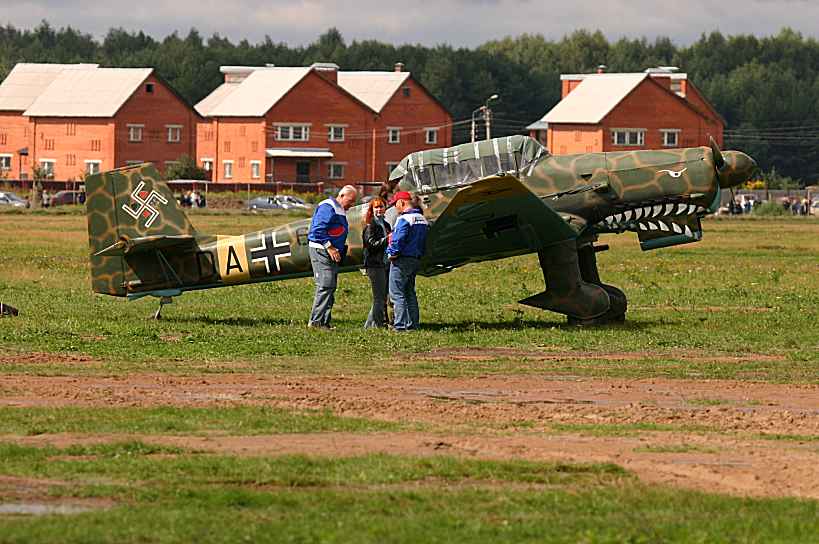 Link to more info on survivors

Show 5 Show All
Shelfari: Book reviews on your book blog