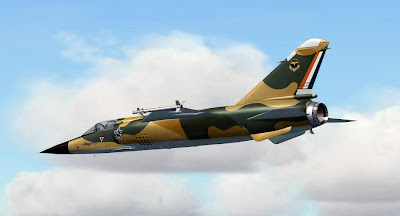 The Mirage F1 came about as successor to the Mirage III for the French Air Force in the late 1960s.

A variety of new technologies were evaluated and tested including vertical take-off and swing-wing configurations. Dassault Industries developed the F1 as a private venture, providing a cheaper multi-purpose aircraft, designed to obtain the best operational radius and efficiency and offering the widest versatility possible at the time..

The idea was that even a small fleet of these aircraft should represent an important military threat, as later proved later in Angola! It was to be able to operate from remote and short rough air strips, with a  low landing speed (145 knots). It needed comparatively little ground equipment, and had a self starter. It offered a short turn-around time of about 15 minutes between two identical missions, and pressure refueling took only six minutes! An engine change involving four men took only about three hours.

The SDAP automatic testing unit enabled automatic trouble shooting in the field. The GAMO alert unit allowed the Mirage F1 to be scrambled in less than 2 minutes. Thus it was to prove an ideal 'Bush' warfare aircraft capable of operating for extended periods away from it’s home base, as was the case for the SAAF operating in Namibia. 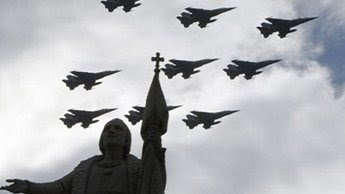 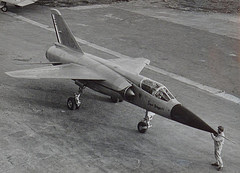 Flight trials continued until, during a low-altitude high-velocity pass, the horizontal stabilizers of Mirage F1-01 broke away due to a divergent vibration phenomenon called ‘flutter’ and the aircraft struck the ground near Fos-sur-Mer, killing René Bigand. Despite the accident, notification was given of an order for three pre-production aircraft: the Mirage F1-02, 03 and 04 with the Atar 9 K 50 jet engine.

During September 1967, the French Air Force expressed interest on the Mirage F1C as an all weather interceptor, carrying the Cyrano IV radar. The second prototype F1-02 first flew in March 1967 and the third in September 1969. On the 17th June 1970, the final prototype F1-04 flew. This became the production version.


In 1986, French Mirage F1s returned to Chad, as part of Operation Epervier, with four F1C-200s providing fighter cover for a strike package of eight Jaguars during the air raid against the Libyan airbase at Ouadi Doum, on February 16. Two F1CRs also flew pre and post-strike reconnaissance missions.


In October 2007, three Mirage 2000s and three Mirage F1s were deployed at Kandahar Air Force Base, where they flew close air support and tactical reconnaissance missions in support of international forces in Southern Afghanistan.

The Mirage F1 is coming to the end of its useful lifespan within the French Military and the type was retired from service following closures to the 2 main bases Reims-Champagne and Colmar-Meyenheim in 2009-2010.


In July 1973 Dassault tendered the Mirage F1E (Mirage M53) as contender for a new European fighter aircraft contract required by Belgium, Denmark, the Netherlands and Norway. To meet this tender specification the Mirage F1 was equipped with more sophisticated avionics, and the more powerful M53 engine. This engine is shorter than the standard Snecma ATAR 9K50 and required larger air intakes and a shorter rear fuselage. Unfortunately, the F1 was beaten in this potentially lucrative deal by the American General Dynamics F-16. Despite this, the Mirage F1 was an export success : 473 aircraft equipped the Air Forces of South Africa, Spain, Greece, Kuwait, Libya, Morocco, Ecuador, Iraq, Jordan and Qatar.


South African Connection:
The F1-04 prototype was the first Mirage F1 ever flown by a South African.
Zach Repsold flew it on 6 October 1971. This model differed from the others by using slotted slats. On the 14th March 1974, the French Air Force received their first Mirage F1.

South Africa began looking to replace the Mirage III by the early 1970s . The Mirage F1 was an improvement on the Mirage III: It had an increased speed, increased pursuit flight time , speed (a tripled mach rating) with an increased  ground mission range (doubled) Take off runway use was 1/3 reduced, with 1/4 less approach speed plus increased maneuverability. On the 27th June 1971, Dassault and SNECMA announced a technical cooperation agreement with South Africa for the license manufacture of the Mirage F1 and engine. The intention was to produce up to 100 Mirage F1s. 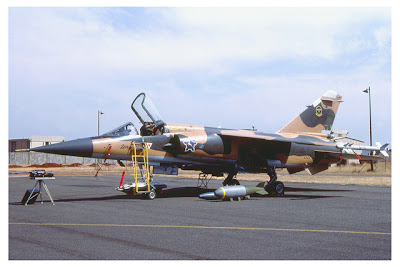 Mirage F1-CZ '200' was the main project aircraft, whilst Mirage F1-AZ '216' was used as the project aircraft for the 'AZ' fit-out. Due to the approaching Arms Embargo, Dassault rushed the F1-AZ delivery through, leading to teething problems with this ground attack variant. 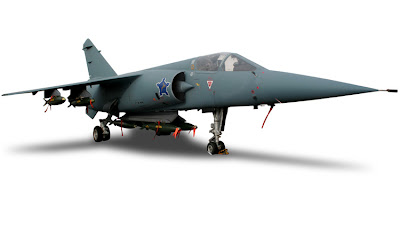 Delivery from France took place in great secrecy on 4 April 1975 with two Mirage F1-CZ’s transported to South Africa in a SAAF C-130 Hercules. South Africa maintained great secrecy over this aircraft and only revealed a new 'Mirage type' during a fly past at the Ysterplaat Air Show in October 1975. In April 1977 that the press was finally allowed to see the production line in Kempton Park. Even so the existence of the Mirage F1-AZ remained classified until 1980.
at March 18, 2013