Rooivalk: A Hawk or a Turkey ?


Rooivalk: A Hawk or a Turkey? 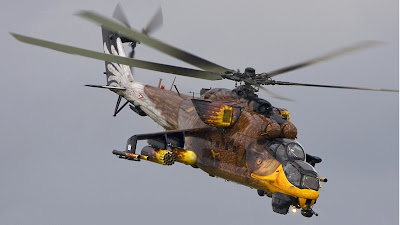 Hawk or turkey ? Either way, the project has now been slaughtered: 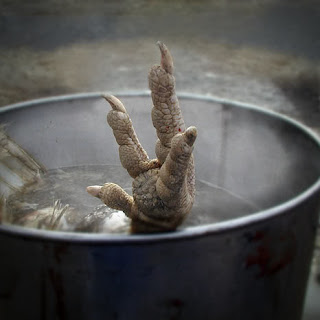 In comparison, the direct cost of South Africa’s controversial acquisition of 28 Gripen fighters and 24 Hawk fighter-trainers is $2,2-billion (US).

The Rooivalk was hailed in South Africa as a world-beater, the best such helicopter anywhere. Yet, 17 years after the Rooivalk first flew, not a single export order has been won, and only 12 production standard aircraft have been manufactured, all for the South African Air Force (SAAF).

By 2007 the production Rooivalks were not fully operational and could not be deployed elsewhere in Africa in United Nations (UN) support. (The UN employed Russian-built Mi-24 and Mi-35 attack helicopters on combat missions in the Democratic Republic of the Congo in recent years.)

No one could reasonably claim that this represents a success story. So what went wrong? 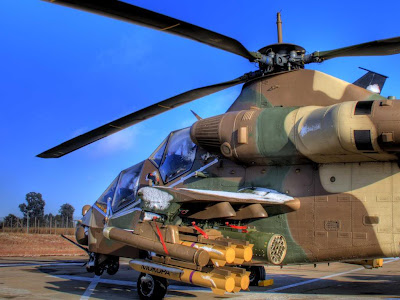 The idea of South Africa developing an attack helicopter was not, in itself, erroneous. The then South African Defence Force saw a real need for an attack helicopter. The rationale was to escort and support heli-borne raiding forces, destroy anti-aircraft positions, and meet the potential threat of growing tank forces in other African countries, particularly Angola. Equipped with anti-tank missiles, such a helicopter could neutralise numerically superior hostile tank forces. Angola was reportedly being equipped with the Mil-Mi 24 gunships by the Soviet Union at the time 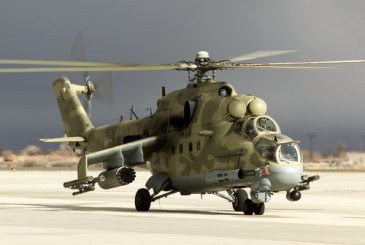 South Africa could not design and build a complete helicopter from scratch. Design, development and manufacture of the necessary power plant and dynamics system (rotor head, main and tail rotors, and main and tail gearboxes) were beyond SA’s capabilities. Acquiring such capabilities would have been extremely time consuming and incredibly expensive, rendering the project totally impractical. So the new machine had to be based on an existing design, as far as its power plants and dynamics were concerned.

At the time, the SAAF operated two main helicopter types – the Aerospatiale Alouette III and the Aerospatiale Puma. The Alouette III could not possibly form the basis of a credible attack helicopter – it was not just that it was small, but its power plant and dynamics system were 1960s technology, outdated, and lacking in power. (An Alouette III power plant and dynamics system were used as the basis for an engineering and development capability demonstrator for Atlas (Now Denel) as a precursor to the Rooivalk programme; designated the Alpha XH-1, it first flew in 1984 and is today preserved at the SAAF Museum at Air Force Base Swartkops, Pretoria.) 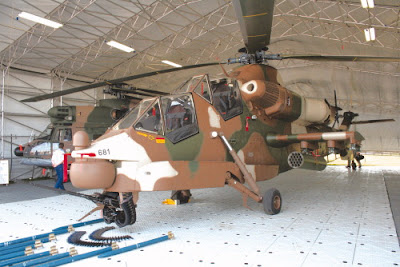 The result is a helicopter with a greater payload and range capability than the Puma and a greater power-to-weight ratio than the Super Puma/Cougar. In consequence, the Oryx is an ideal transport helicopter for the hot temperatures and high altitudes frequently found in Southern Africa.

The Oryx was developed in parallel with the Rooivalk prototypes. Being simpler and cheaper than the Rooivalk, the Oryx program was completed much more rapidly, the helicopter being unveiled in 1991.
It has been the SAAF’s transport helicopter ever since. Thus it was proposed that the Super Puma powerplants and dynamics systems, being made in South Africa for the Oryx program, be used as the basis for the planned attack helicopter.


Some engineers proposed that the attack helicopter be based on the engines and dynamics system of the Aerospatiale Dauphin, an intermediate- (light/medium) size helicopter with good manoeuvrability and power, which would have resulted in a smaller, more rapidly developed, and more economical (to develop, buy and operate) system.

As the French were allowing South Africa to use the power plants and dynamics of the Super Puma, they would surely have agreed to the South Africans using the same elements from the Dauphin. However, the SAAF felt that using the same engines and dynamics as the Oryx would simplify logistics and reduce maintenance costs, so the decision was made to use the Super Puma systems as the basis for the Rooivalk.

The consequence of this decision was that the attack helicopter would have to have a big air-frame, which it needed in order to accommodate the fuel required for it to achieve the desired range. But it also meant that it would be able to carry many sensors, advanced avionics, and a heavy and diversified weapons load. In short, it would have the capacity to be outfitted as a top-of-the-line, world-beating attack helicopter. And this, possibly, plus the lavish defence budgets of the 1980s, seduced the SAAF and Armscor/Atlas/Denel into vaingloriously seeking to make the Rooivalk a world-beating system. 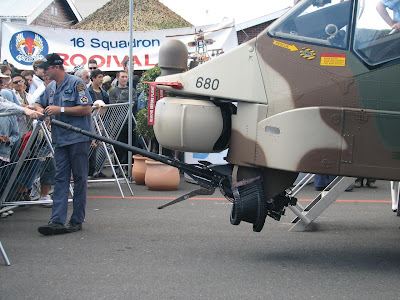 This was the fundamental flaw in the program – it was an over-sophisticated project. Trying to be the best drove up the costs, and extended the development time frame, very significantly indeed. (The cost increase, relative to a simpler design, was not unforeseen, with the result that an appropriate budget was assigned and, contrary to some reports, the Rooivalk program never exceeded its budget during the period 1984 to 1990.)

Whereas a simpler, cheaper, basic “good enough” Rooivalk system would almost certainly have completed its development in the late 1980s and entered production in parallel with the Oryx. The actual Rooivalk was far from finishing its development when the war in Angola ended in 1988 and the then South African government began to cut the defence budget. The first Rooivalk prototype made its maiden flight only in 1990.

Budget cuts inflicted further delays on the program, and the planned acquisition was cut from 36 to only 12. This deprived the program of the benefits of economies of scale.

Key decision makers in the SAAF felt that the Rooivalk was a threat to what was most important to them – their fighter program – so they sought to kill it; for a period. The Rooivalk was kept going with army funding because the army felt that it was essential for them. Without the Rooivalk, they would have needed a lot more armour. But the money was always very tight.

Make no mistake – the Rooivalk was a triumph for South African industry and technology. The program created a significant and powerful pool of experience and expertise in the country, which played an essential role in the creation of highly successful South African private- sector aviation companies such as Advanced Technologies & Engineering (ATE) and Aerosud. But the delays that were caused by the budget cuts meant that what had been a cutting-edge aircraft in 1990 was an obsolete aircraft when it finally began to be delivered to the SAAF in 1998.

As a flying machine (as distinct from a fighting machine) the Rooivalk is first class, reportedly hailed by all who have flown it. It is also ideal for operations in Africa.

However its avionics system, a magnificent achievement for local industry when it was developed and integrated in the late 1980s, is today as obsolete as a dinosaur’s brain.

This is a key reason in Denel’s failure to export the aircraft. No one will buy a warplane whose avionics system is based on 20-year-old computer technology. Then there is the cost of the aircraft – the direct result of both attempting to make it a world beater and depriving it of economies of scale by cutting the order to only 12.

“The unit cost of the Rooivalk is about $US 40-million,” This makes it as expensive as the Boeing Apache and the Eurocopter Tiger, the latest models of which have state-of-the-art avionics, and much more expensive than the smaller AgustaWestland Mangusta/Mongoose, and the Russian Mi-24/35 family.

Export possibilities have been further reduced by foreign worries about the long-term viability of Denel: will the company still be around in 20 years to continue to support the Rooivalk, if they should buy it? And then there is the fact that the Rooivalk is very heavily dependent on French technology, now the property of Eurocopter, yet Denel tried to export the Rooivalk not only without Eurocopter’s prior agreement and support, but actually in open competition (for example, in Australia) with Eurocopter’s own Tiger.

Foreign diplomatic sources have indicated that the European company has warned countries interested in buying the Rooivalk that they could not be guaranteed the support they would need for the engines and dynamics. This effectively killed off any remaining interest in the Rooivalk.

Oversophisticated, overdelayed, overexpensive, outdated, and lacking economies of scale, and now out of production.

The program could simply be cancelled, the costs written off, the aircraft scrapped or sent to museums, like so many other South African aerospace projects launched in the 1980s. But the South African National Defence Force would still need an attack helicopter, to support UN missions elsewhere in Africa.

Attack helicopters, an armed helicopter intended to undertake missions in direct support of troops, “attack” originally being the US term directly equivalent to the British term “ground attack” – are the only vertical take-off and landing combat aircraft available to a country like South Africa.

Unlike the SAAF’s fighters, they do not need good-quality surfaces to operate from, nor large spaces, and they will also be able to operate from the flight decks of the Navy’s planned amphibious ships. Cancelling the Rooivalk will leave a gap which will, sooner or later, have to be filled by buying someone else’s attack helicopter. 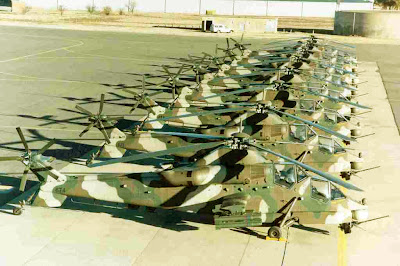 Janes Defence opines that the SA Defence Force needs more than 12 of these machines – an absolute minimum deployment would need three attack helicopters, to ensure two were always available for operations; with just 12, the SAAF could will have more than just two such deployments at any time. Add to this the fact that half the Gripens are now in mothballs, and things are starting to look a bit grim for the SAAF operational capability.