Iran has been caught out in another Photoshop blunder in an effort to prove its purported stealth fighter jet is the real deal. 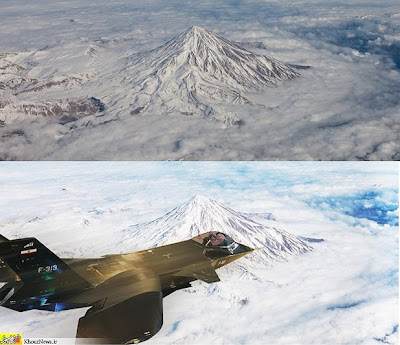 But the picture was immediately suspected to be fake, with the lighting on the plane and its position similar to its appearance in pictures on the ground in Tehran at the unveiling earlier this month.

President Mahmoud Ahmadinejad described it as "among the most advanced fighter jets in the world", capable of hitting ground and air targets by stealth, but experts dismissed it as a "laughable fake" which looks like a toy or mock-up model.

Now the new picture has also been laughed off, after it was revealed by The Atlantic Wire that the background image of the mountain was taken from the stock image site PickyWallpapers.com.

Aviation experts have questioned whether the jet shown can even fly as it was too small to accommodate a real pilot and the controls and wiring looked too simple. It also lacked the bolts and rivets found on all aircraft and offered wonky aerodynamics.

In 2008, news wire Agence France-Presse had to retract an official image of an Iran missile launch following revelations it was doctored to include an extra missile. The photo had appeared on the front pages of many media outlets including NYTimes.com and the front page of The Los Angeles Times.

In November last year Iran showed off a new drone design, but it was later revealed that the photographs it released were ripped off from a Japanese university and doctored.

Iran last month claimed to have successfully sent a monkey into space in a Pishgam rocket. That announcement was also accused of being faked as photographs of the monkey before and after showed two clearly different animals. Iran is sticking to its guns.