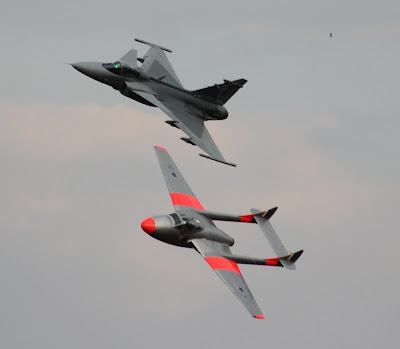 Rare footage of a Saab Gripen and a DH Vampire Flying in formation in South Africa: 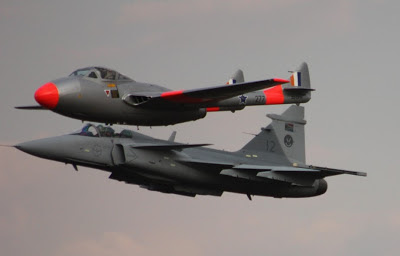 I do not own copyright to these images or videos. Just obtained off the net.
I am happy to add your credits if you wish , just contact me

In 1999, South Africa signed a contract with BAE/Saab for the procurement of 26 Gripens (C/D standard) with minor modification to meet their requirements. Deliveries to the South African Air Force commenced in April 2008.

By April 2011, 18 aircraft (nine two-seater aircraft and nine single-seaters) had been delivered.
In May 2011, as allegations of bribery to prevent a possible cancellation of the Gripen procurement continued. Saab issued strong denials over any payments being made

The following month, Saab announced that payments of around $3.5 million had been made by partner BAE Systems On 13 March 2013, South African Defense Minister Nosiviwe Mapisa-Nqakula reported that "almost half of the SAAF Gripens" have been stored because of insufficient budget to keep them all flying. Of the 26 Gripens delivered, 12 are in long-term storage, with 10 or fewer being operational.