Does Honda have it's sights set on the Personal Jet Market? 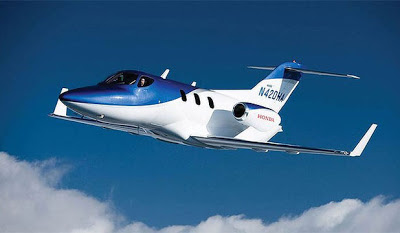 Honda has started producing a machine almost twice as fast as the Bugatti Veyron.

The new release seats six and is expected to cost about $4 million, but you can't take the controls without a pilot's licence.

The Japanese manufacturer claims the HondaJet "is the fastest, highest-flying, quietest, and most fuel-efficient jet in its class".

International travel might be best left to commercial carriers, as the HondaJet could not fly from Sydney to Singapore without stopping at least twice for refuelling.

Honda is the first car manufacturer to have entered the private jet business, but many others have a history of flight.

A statement released by the company said aircraft production had been a long-term goal.

"The HondaJet is Honda's first-ever commercial aircraft and lives up to the company's reputation for superior performance, efficiency, quality, and value," it said.

Honda says its jet is unlike others because its engines are mounted over the wings.