As the top fighter aircraft of the end of WW2, the Mustang has had a few interesting (and some odd) spin-offs:

The North American F-82 Twin Mustang is probably one of the strangest, born on the success of the twin boom-tailed P38 Lightning someone had the idea of combining the fuselages of 2 Mustangs.

They built 270 of these things, and interestingly the first three North Korean aircraft shot down during the Korean war were victims of these unusual aircraft. 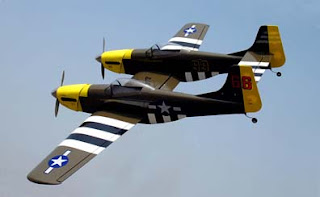 Based on the iconic P-51 Mustang, which rose to fame as one of the USAAF’s most successful fighters of WWII, the F-82 Twin Mustang more or less lived up to its name. It was essentially two P-51′s fused together at the wing and the horizontal stabilizer. It was initially intended to be  a very long-range (VLR) escort fighter to accompany Boeing B-29 Superfortresses on their missions over Japan. However the first F-82′s were only ready for service after WW2 had come to an end. 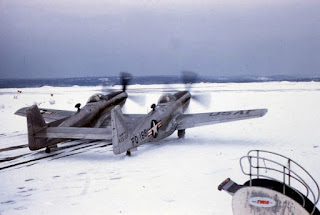 Development of the North American F-82 Twin Mustang began back in 1943, when the company began work on a fighter that could travel over 2,000 miles (3,220 km) without refueling. Although the aircraft is based on the P-51 Mustang, there were a number of changes necessary to make the aircraft airworthy and fit for its role. The fuselages were lengthened by 57 inches (145 cm) in order to accept additional internal fuel tanks and equipment. The center section of wing was also completely redesigned. Within this central wing six M2 Browning machine guns were fitted. In addition the outer wings were strengthened so they could carry additional fuel in external drop-tanks, or extra ordinance such as rockets or bombs.

The North American F-82 Twin Mustang’s first outing didn’t prove very successful as the aircraft was unable to get off the ground. After a month of investigation engineers figured out what the problem was. The propellers had been designed so that they spun in opposite directions to counter each other out, and they both turned upwards as they approached the center wing. However this resulted in all the lift from the central wing being cancelled out from the drag of the propellers. By switching the rotation of both propellers, so they now met as they were turning downwards, the problem was rectified.

Early prototype F-82′s both featured fully equipped cockpits so the pilots could alternate control on long flights. However later night-fighter versions of the F-82 Twin Mustang only had flight controls on the left side. The right side cockpit was for the radar operator.
To match its odd design the F-82 had another quirk. It was one of the only aircraft in which the trainer version was faster than the combat version. This was due to the fact some of the earlier F-82′s were powered by British-made Merlin engines. However the US military decided it would be more fitting if the aircraft featured an all-American engine, so later aircraft were fitted with less powerful GM Allison engines.
During its lifetime the F-82 Twin Mustang saw service as a long range interceptor to safeguard against Soviet air attack, it operated as a radar-equipped all-weather night fighter, it was used as a air-to-ground attack aircraft, it was the first aircraft to take part in a combat mission during the Korean War and it was the first aircraft to score confirmed kills in the Korean War. Interestingly, although the F-82 Twin Mustang excelled during the first few months of the Korean War, as the conflict went on it was becoming increasingly obvious that propeller driven aircraft had no future in air-to-air combat as jet fighters were increasingly deployed by both sides.
After just seven short but busy years of service the North American F-82 Twin Mustang was retired in 1953. It remains one of the most successful weird aircraft ever to have flown.
At least five examples of the North American F-82 Twin Mustang exist today, and they are held in various museums and locations across the US.
at November 27, 2012