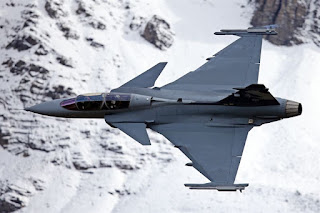 Defence and security company Saab’s Gripen E/F Test Aircraft has now been introduced to Switzerland.
It took place during the Swiss Air Force spectacular annual flight demonstration at the Axalp-Ebenfluh shooting range.
Saab took the aircraft to Switzerland on invitation of Armasuisse, which is responsible for the acquisition process of a new fighter to replace the Swiss Air Force´s fleet of F-5 Tiger. The Swiss Government officially declared their type selection of Gripen as the replacement in November of last year.
Every year, the flight demonstration at the Axalp event attracts thousands of spectators that hike up the mountain for hours to reach the shooting range, which is situated at more than 2 000 meters above sea level. This year was no exception, it is estimated that approximately 7 000 people witnessed the event.
The Gripen E/F Test Aircraft was flown by a Swiss pilot in the front seat and with a Saab test pilot in the back seat.
“We have been flying with two Swiss pilots during a week for the Axalp event and the aircraft has performed excellently. We are now looking forward to continue the test flight programme in cooperation with Armasuisse and the Swiss Air Force,” says Richard Ljungberg, Chief Test Pilot at Saab. “The flights at Axalp was a good opportunity to show Gripen in Switzerland, both to the public and politicians.”
“This week we gave the Swiss people including media and key stakeholders from the Security commission (SiK) the opportunity to see, touch, and feel the aircraft. It was truly a magnificent week and we proved that the Gripen, is as we all know, outstanding.”
Gripen E/F, the next generation Gripen, is an advanced and modern fighter aircraft system that meets the demands of tomorrow’s air defence from countries around the world. Saab keeps building on experiences from previous versions of Gripen which have a proven track record with five air forces.
The next generation Gripen will have a dramatically enhanced performance. The Gripen E aircraft delivered to Switzerland will be a state-of-the-art fighter aircraft system with advanced capabilities. The new software and hardware (e.g. the new AESA radar) of the next generation Gripen E have been tested and demonstrated in the Gripen E/F test aircraft.