Being a long-time Mirage fan, I was (pleasantly) surprised to learn that Austalia, like South Africa had operated and built Mirages under licence from Dassault in France

The search for a Sabre replacement began in the 1950s, and when a joint evaluation team from the Departments of Air and Supply visited Europe and North America in 1960, the Dassault Mirage III emerged as their selection over the Lockheed F-104 Starfighter.

Built by the French firm Generale Aeronautique Marcel Dassault (GAMD), the Mirage I flew on 25 June 1955, followed the following year by the prototype Mirage III. Having selected the Mirage, the RAAF then had to decide on the power plant, and with the Rolls Royce Avon already in service powering both the Sabre and the Canberra, this option was pursued for the Mirage. A French Mirage IIIA, known as 'City of Hobart', was fitted with an RB146 Avon 67 turbojet and flew on 13 February 1961. This was known as a Mirage IIIO, but did not receive a RAAF serial number as, although this modification delivered superior performance, its cost was prohibitive and this project was discontinued.

Having selected the French SNECMA Atar 9C engine, the first RAAF aircraft, numbered A3-1, flew at Bordeaux on 14 March 1963 and was handed over to the RAAF at Villaroche, near Paris, on 9 April. This definitive IIIO was similar to the French Air Force Mirage IIIE. While A3-1 was flown to Australia by Hercules, the second French-built aircraft, A3-2, remained in France until August 1965 to test the various RAAF modifications. Meanwhile, two further aircraft were shipped to Australia as fully-equipped major assemblies and completed at Avalon by the Government Aircraft Factories (GAF), the Australian prime contractor. The first of these, A3-3, was flown by Squadron Leader (later Air Vice Marshal) Bill Collings at Avalon on 16 November 1963.

Following the two French aircraft, the first 48 Australian-assembled aircraft (A3-3 to A3-50) were built as Mirage IIIO(F) interceptors and No 2 Operational Conversion Unit (2OCU) at Williamtown began receiving deliveries in 1964. No 75 Squadron became the first operational unit to equip in 1965 followed by No 76 Squadron in 1966. The next 50 aircraft (A3-51 to A3-100) were built as IIIO(A) ground attack variants with slightly different radar and the addition of doppler navigation and radar altimeters for low-level operation.

In 1967 No 75 Squadron deployed to Malaysia to replace No 3 Squadron. No 3 Squadron then became the first unit to equip with the ground-attack Mirage under Wing Commander Jake Newham, who was later to be Chief of Air Staff. When No 3 Squadron returned to Butterworth in 1969, No 77 Squadron re-equipped and became the fourth RAAF Mirage squadron.

The first two-seater Mirage IIID, A3-101, flew on 6 October 1966 and was accepted by the RAAF at Avalon on 10 November, followed by a further nine over the next year. The trainer version did not have the Cyrano II nose radar; a second cockpit was added behind the first and the avionics equipment previously stored there was relocated in the nose. The Mirage trainers were assembled by GAF from imported French-built fuselages and CAC-built wings and vertical tail surfaces.

In December 1970 the government approved the procurement of six additional Mirage IIID trainers at a cost of $11 million. These aircraft, A3-111 to A3-116, delivered from August 1973 to January 1974, enabled the retirement of the Sabre from operational fighter training.

An anomaly in Mirage deliveries occurred with A3-26. This aircraft was retained in France by Dassault from 1965 to 1968 as a trials installation for the IIIO(A) standard. The aircraft was finally delivered to 2OCU in November 1968 and the following June it was decided to convert the remaining IIIO(F) aircraft to the IIIO(A) standard for the ground-attack role.

With defence cuts under the Whitlam Government, No 76 Squadron was disbanded amongst much ill feeling in August 1973. The remaining three squadrons continued operating the Mirage in air defence and ground attack, based at Williamtown and Butterworth. Several Mirage aerobatic teams were also formed during its service with No 77 Squadron. Best known were the Deltas in 1971, followed by the Miracles in 1976 and a three-aircraft team of red, white and blue aircraft organised for the 1981 air shows. Basing of aircraft extended to Darwin in 1983 when No 75 Squadron relocated from Butterworth. 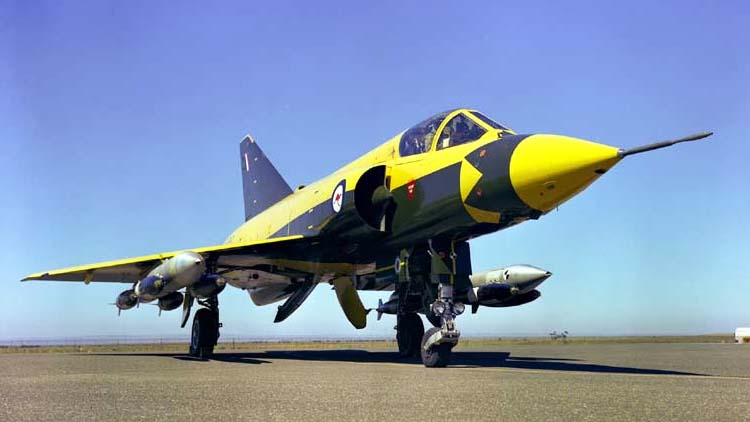 As 2OCU began to work up for the F/A-18 Hornet in 1984, all Williamtown-based Mirages were transferred to No 77 Squadron, with some 40 of the type on strength. This must have made No 77 Squadron the largest fighter squadron ever in the RAAF. No 77 Squadron finally relinquished their Mirages for Hornets in November 1987. In March 1986 No 79 Squadron reformed at Butterworth from No 3 Squadron, as the latter began conversion to the Hornet. No 79 Squadron operated the Mirage until disbanding in April 1988, leaving No 75 Squadron at Darwin and Aircraft Research and Development Unit (ARDU) at Edinburgh as the remaining operators. In early September 1988, No 75 Squadron flew a formation of Mirages over the east coast state capitals as a farewell gesture before the aircraft ceased squadron operations on 30 September. In October the remaining No 75 Squadron Mirages were ferried to Woomera and so, appropriately, this squadron, which was the first to equip with the Mirage in 1966, was the last to operate it.

The last RAAF Mirage flight was on 8 February 1989 when A3-101 was flown from ARDU at Edinburgh to Woomera to join 47 of the type in storage pending their disposal. In 1990 Pakistan purchased fifty RAAF Mirages, including two which had been stored at Point Cook, and these have now been delivered to the Pakistan Air Force, where some will undoubtedly fly for many years to come.

The Mirage saw longer service in the RAAF front line than any other fighter. Despite the original estimated design fatigue life of only 1500 hours, some Australian Mirages flew over 4000 hours. Over forty aircraft were lost in flying accidents, but those who flew it held the type in high regard. Although the 'Miracle' has left our skies, many examples remain on display at museums around Australia. 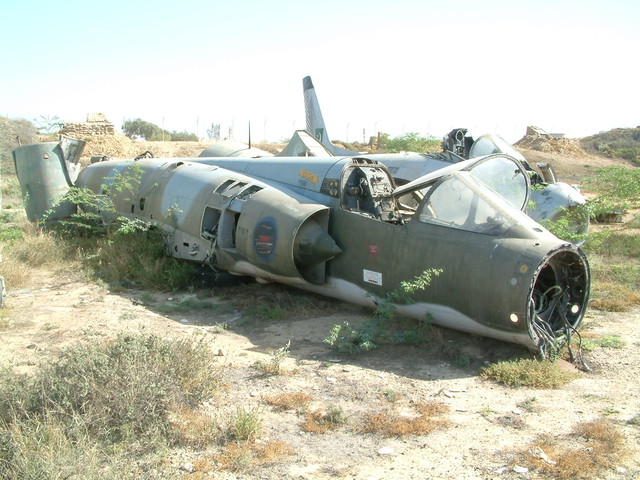 Like so many Mirage IIIs, now designated to the scrapyard:
Death in a Pakistani boneyard for one RAAF Mirage III Selected to replace the Avon Sabre as the RAAF's fighter aircraft in 1960, the Mirage was the first aircraft in RAAF service capable of flying at twice the speed of sound. Entering operational service during 1965, the Mirage served as the front-line fighter until 1988, making the aircraft the longest-serving fighter in RAAF history. Built under licence in Australia by the Government Aircraft Factories (GAF), 100 single-seat and 16 two-seat Mirages were operated by seven RAAF units.

The first Australian-assembled Mirage flew at Avalon airfield in March 1963, and this and the following 48 aircraft were built as Mirage IIIO(F) interceptors. Following aircraft A3-50, production switched to the Mirage IIIO(A) ground attack aircraft with slightly different equipment for this role. In June 1969, the IIIO(F) aircraft were modified to the ground attack standard, to increase commonality within the Mirage fleet. In RAAF service, the Mirage operated with Nos 3, 75, 76, 77 and 79 Squadrons, as well as No 2 Operational Conversion Unit and the Aircraft Research and Development Unit, from bases across Australia and also at Butterworth in Malaysia. With the acquisition of the F/A-18 Hornet in 1985, the Mirage was phased out of service, and in October 1988 the last Mirages of No 75 Squadron were ferried to Woomera for eventual disposal.

After the cessation of Mirage operations, a number of aircraft were retained by the RAAF as training aids. This aircraft, A3-92, was one such aircraft and was used at the RAAF School of Technical Training at Wagga Wagga before transfer to the RAAF Museum for preservation.

Delivered from the GAF airfield at Avalon, Victoria, on 26 July 1968, A3-92 served with Nos 3 and 79 Squadrons at Butterworth, Malaysia, and No 77 Squadron at Williamtown, New South Wales. Withdrawn from service in May 1987, the total airframe time for the aircraft was 4037 hours.