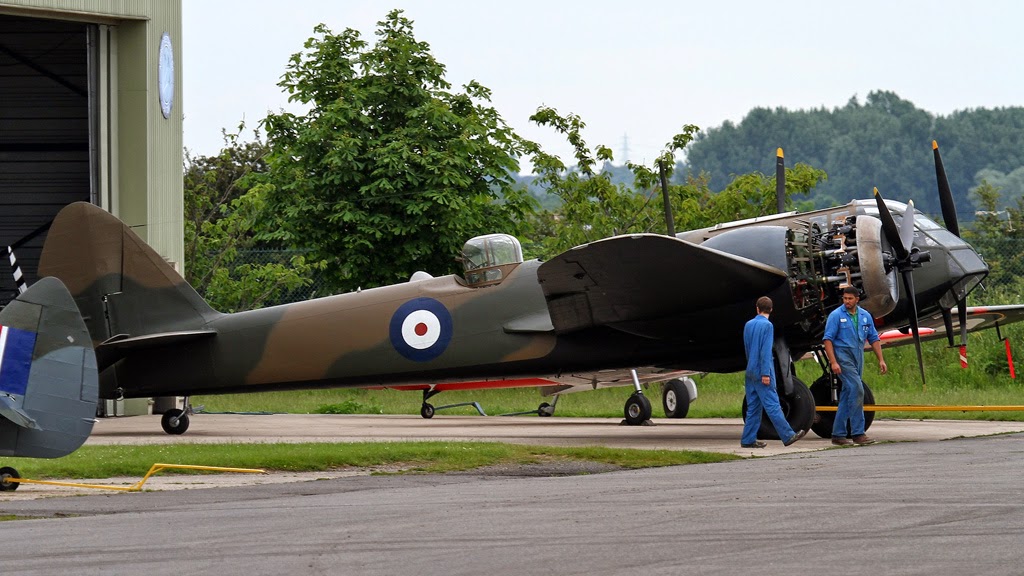 Global Aviation Resource reports that May 30th the  Imperial War Museum Duxford the Aircraft Restoration Company’s Bristol Blenheim appeared in public as a complete aircraft for the first time since its long-term rebuild began in the summer of 2003. 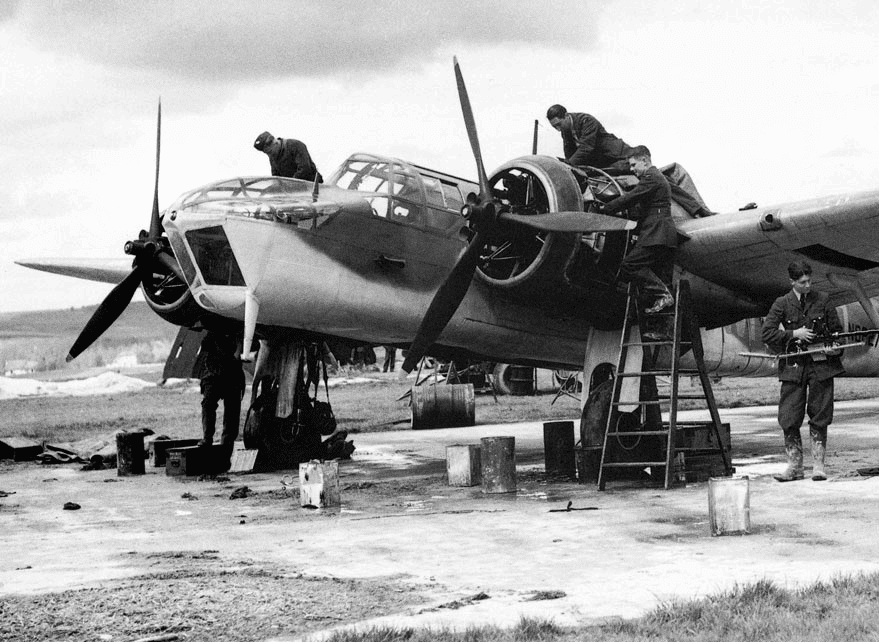 ARCo recovered their first Blenheim from Canada in the 1970s (RCAF serial 10038). The airframe was originally license-built by Fairchild Canada as a Bolingbroke Mk.IVT; essentially a Blenheim Mk.IV with some modifications and North American hardware/instrumentation. ARCo worked on the aircraft for twelve years, restoring her as a Blenheim Mk.IV (registered as G-MKIV). She made her first flight in May 1987, but was involved in a touch-and-go landing accident at Denholm Airfield just a month after and written off, miraculously without loss of life. Undeterred, her restoration crew determined to get another Blenheim back in the air. They obtained a further Canadian-built Bolingbroke IV (RCAF 10201), and managed to get her flying again in just five years as G-BPIV; their previous experience helping greatly to speed up the rebuild progress. She flew again in June 1993; the world’s only flying Blenheim was a huge hit on the air show circuit! 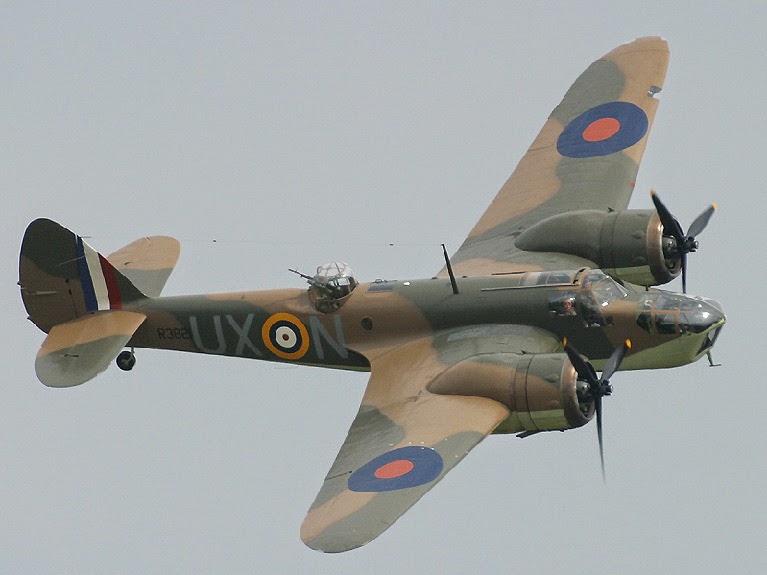 When she was airworthy 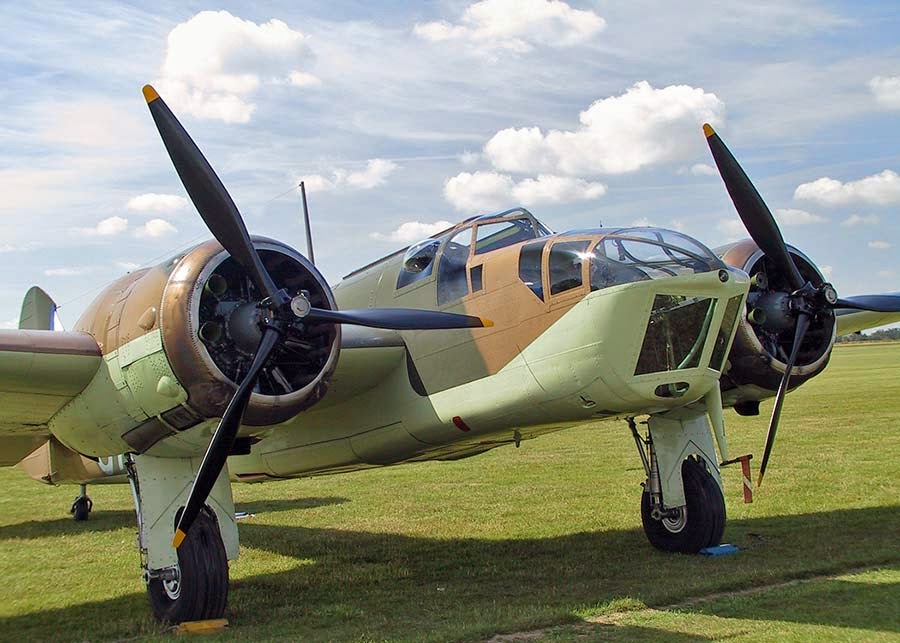 Unfortunately, the Blenheim crash-landed again in August 2003; this time at Duxford. While the aircraft suffered considerable damage, she wasn’t broken beyond repair. The Blenheim’s crew didn’t give up on her and formed a trust to ensure her continued operation in the UK.  They contracted ARCo to provide two full-time engineers to support the restoration project undertaken by Blenheim Duxford Ltd. (and supported by The Blenheim Society). 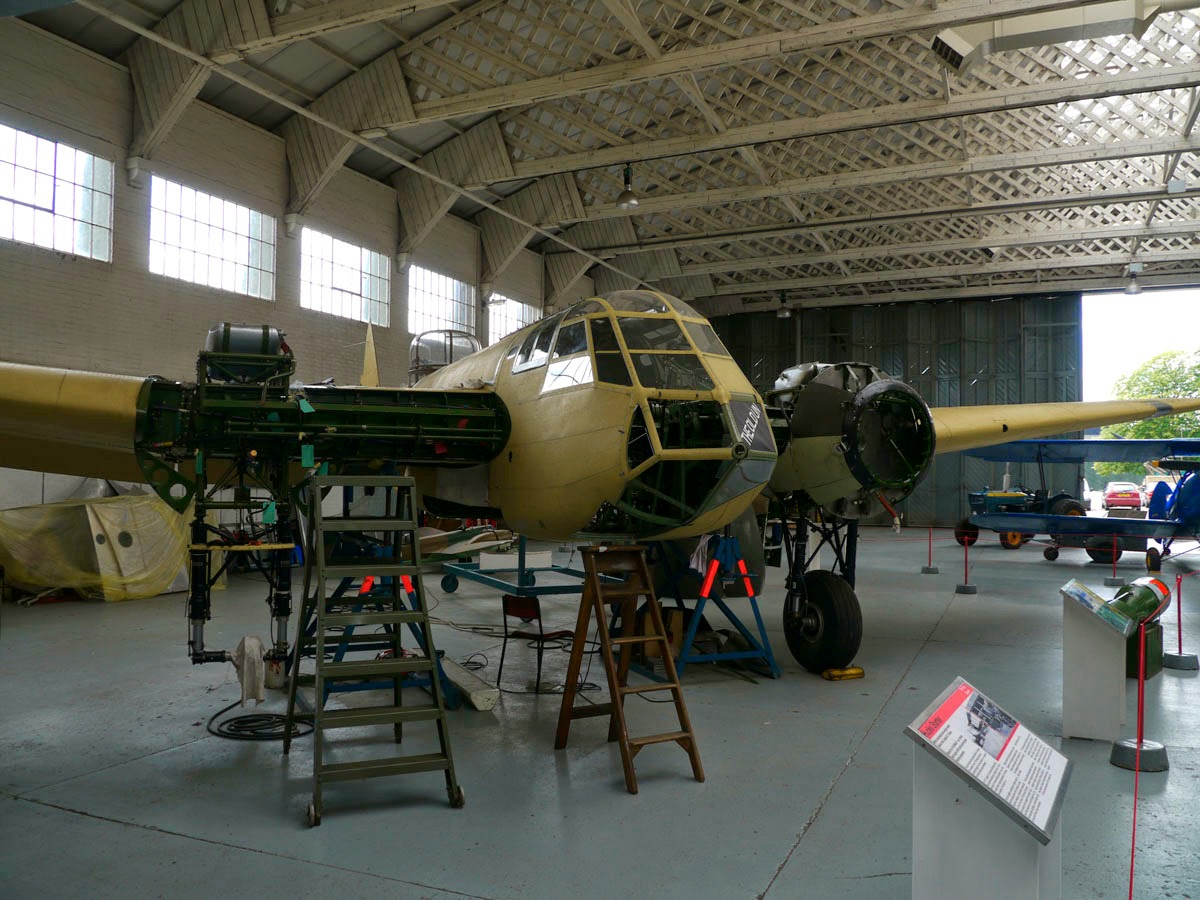 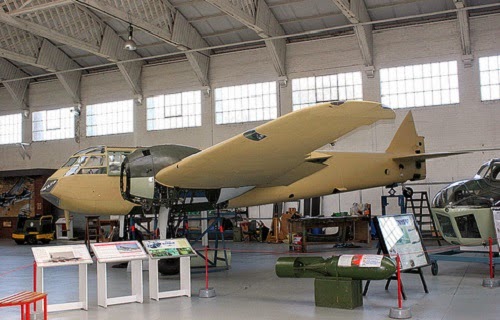 The Blenheim has undergone a thorough rebuild inside Duxford’s Hangar 3, and more recently in ARCo’s workshop. Interestingly, the team has decided to rebuild the aircraft to Mk.I standard. The bulk of the aircraft is nearly identical to a Mk.IV, except for the forward fuselage which is radically different. The Mk.I is essentially extinct (as are British-built Blenheim IVs, with no complete examples known to exist), but a few forward fuselages survive. One of these ended up at Duxford a few decades ago.

Ralph Nelson, a Bristol employee, had converted it into a peculiar automobile during 1946, using the chassis and power train from an Austin 7

The Mk.I fuselage comes from Blenheim L6739, a Battle of Britain night-fighter veteran. The Blenheim Society obtained the “car” intending to rebuild it into a fully operational nose section for a potential swap with the Mk.IV nose. The team had already begun this process before the 2003 accident, so it seemed logical to blend what they had already completed into G-BPIV’s restoration once that began. They rolled out the freshly restored “Blenheim Mk.I” in night fighter camouflage just a few days ago, and will eventually mark her as L6739. ARCo ran one of the aircraft’s Bristol Mercury engines on May 23rd, and expect to run the other very soon. If all goes well, she will be flying again very soon and delighting air show audiences again across the UK

BL-200 (bearing the Hakaristi) at the Aviation Museum of Central Finland.


There are currently no Blenheim or Bolingbroke aircraft that are airworthy. One airworthy Blenheim had been rebuilt from a scrapped Bolingbroke over a 12-year period, only to crash at an airshow at Denham within a month of completion in 1987.

A replacement Bolingbroke Mk IVT was rebuilt to flying status in just five years and painted to represent a Blenheim Mk IV in RAF wartime service. It began appearing at air shows and exhibitions in the UK, flying since May 1993 and was used in the 1995 film version of Shakespeare's Richard III. This aircraft crashed on landing at Duxford on 19 August 2003; the crash was feared to have made it a write-off,  but it is presently undergoing an extensive repair and conversion to the Mark I "Short nose" version by The Aircraft Restoration Company (ARC or ARCo) at Duxford, most of the work being done by volunteers.

Funds are raised through donations and also by The Blenheim Society who run a Grand Flying Draw among many other activities. The aircraft is currently in the Aircraft Restoration Company hangar at Duxford and is the property of Blenheim (Duxford) Ltd.

In Canada, a number of other Bolingbrokes survived the war but were summarily consigned to the scrap heap. Postwar, enterprising farmers often bought surplus aircraft such as these for the scrap metal content, tyres for farm implements, and even for the fuel remaining in the tanks. Some surviving examples in Canada of the Bolingbroke can be traced back to this period. The Canadian Warplane Heritage Museum in Hamilton, Ontario is rebuilding a Bolingbroke to airworthy status. The Commonwealth Air Training Plan Museum in Brandon, Manitoba has restored the exterior of one Bolingbroke, painting it in the Air Training Plan yellow color. This particular aircraft is on display at a location on the Trans-Canada Highway in Brandon. A restored Bolingbroke is on static display at the British Columbia Aviation Museum in Victoria, British Columbia. The Canadian Museum of Flight at Langley Airport, Langley, British Columbia has on display the restored nose and cockpit section of a Bolingbroke, and holds the rest of an entire airframe in storage pending future restoration and display.

In Finland, the sole surviving original Blenheim in the world, a Mk IV registered as BL-200 of the Finnish Air Force, has been completely restored and is now on display at the Aviation Museum of Central Finland at Tikkakoski. 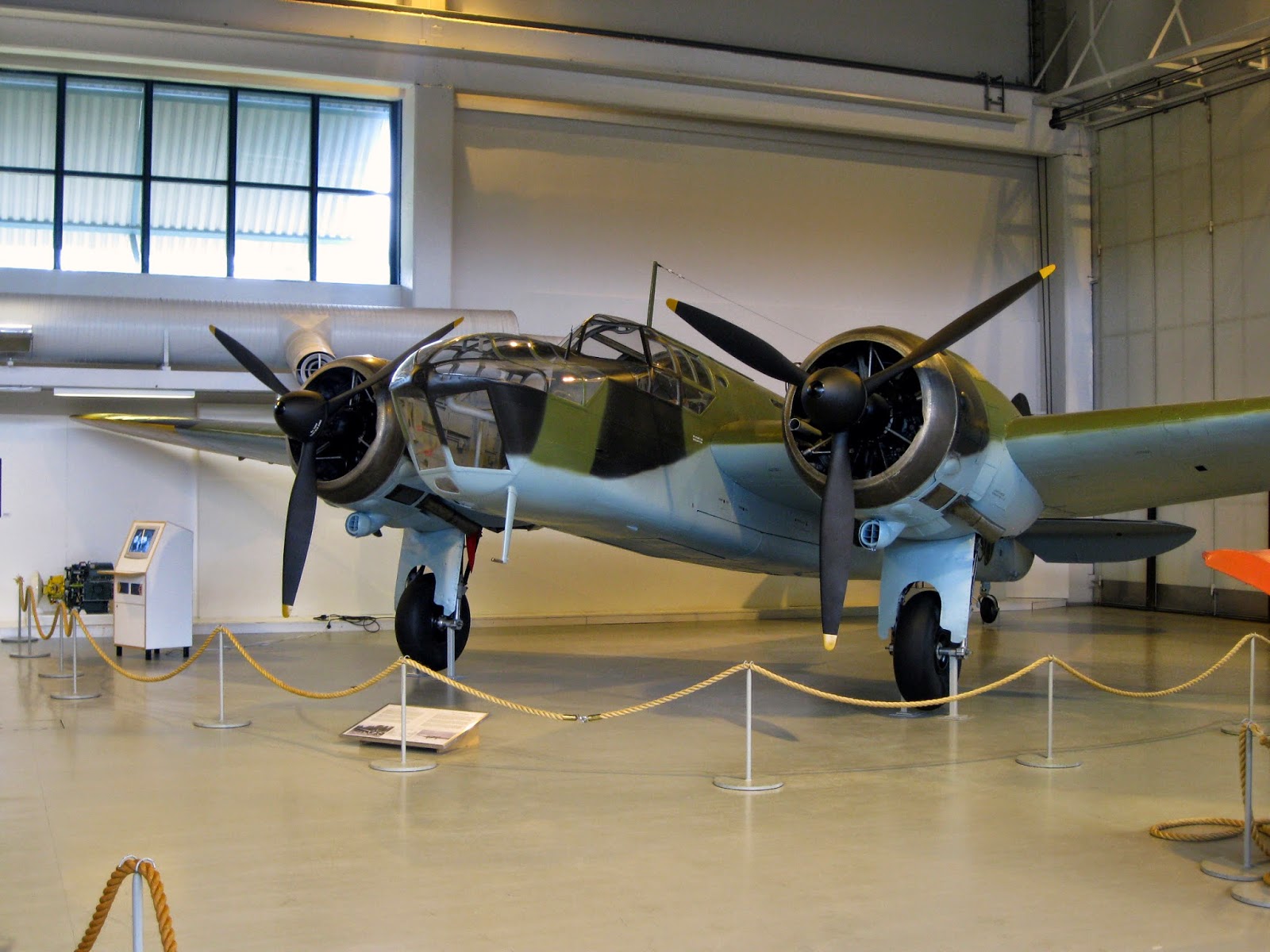 Finnish survivor- the only intact and complete original Blenheim

In the summer of 1996, a Bristol Blenheim Mk IVF was recovered from the sea, a few km off Rethymnon, Crete. The aircraft belonged to No. 203 Squadron RAF and was downed by friendly fire on 28 April 1941. The Blenheim was restored and moved to the Hellenic Air Force Museum. In Arizona, the Pima Air Museum has a Bristol Blenheim Mk IV on static display
at June 04, 2014