22 June : Sixty years ago today, the McDonnell Douglas A-4 Skyhawk took flight for the first time.

A classic of Naval Aviation, the A-4 was an extraordinary aircraft.  The legendary Ed Heinemann created the Skyhawk at one-half of the weight allowed and the type remained in production for over 20 years.  The A-4 became the most impressive conventional bomber of its era, flying like a fighter but capable of bombing targets with great accuracy.

The Skyhawk was so small that it did not require folding wings for use aboard aircraft carriers.  Skyhawks were the US Navy’s primary light bomber during the early years of the Vietnam War, carrying-out some of the first air strikes during the conflict.  On May 1, 1967, an A-4 became a MiG-killer when Lieutenant Commander Ted Swartz downed a MiG-17 with air-to-ground rockets!  A total of 2,960 Skyhawks were manufactured in a number of variants.

Significant numbers were exported to other nations and Argentina, Israel, and Kuwait have all employed the A-4 in combat.  The Blue Angels flight demonstration squadron operated the A-4 from 1974 through 1986.  The Navy Strike Fighter Tactics Instructor program used the A-4 in an adversary role and the TA-4J model served as the advanced jet trainer until being replaced by the T-45 Goshawk.  The aircraft was affectionately known as “Heinemann’s Hot Rod” and the “Scooter.”

The Douglas A-4 Skyhawk is a carrier-capable attack aircraft developed for the United States Navy and United States Marine Corps. The delta winged, single-engined Skyhawk was designed and produced by Douglas Aircraft Company, and later by McDonnell Douglas. It was originally designated A4D under the U.S. Navy's pre-1962 designation system.

The Skyhawk is a lightweight aircraft with a maximum takeoff weight of 24,500 pounds (11,100 kg) and has a top speed of more than 600 miles per hour (970 km/h). The aircraft's five hardpoints support a variety of missiles, bombs and other munitions and were capable of delivering nuclear weapons using a low altitude bombing system and a "loft" delivery technique. The A-4 was originally powered by the Wright J65 turbojet engine; from the A-4E onwards, the Pratt & Whitney J52 was used. 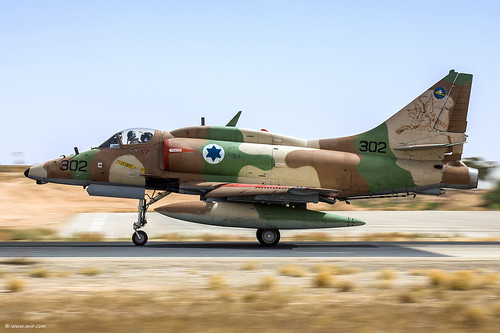 
Skyhawks played key roles in the Vietnam War, the Yom Kippur War, and the Falklands War. Fifty years after the aircraft's first flight, some of the nearly 3,000 produced remain in service with several air arms around the world, including from the Brazilian Navy's aircraft carrier, São Paulo.

Skyhawks were the U.S. Navy's primary light attack aircraft used over North Vietnam during the early years of the Vietnam War; they were later supplanted by the A-7 Corsair II in the U.S. Navy light attack role. Skyhawks carried out some of the first air strikes by the US during the conflict, and a Marine Skyhawk is believed to have dropped the last American bombs on the country. Notable naval aviators who flew the Skyhawk included Lieutenant Commanders Everett Alvarez, Jr. and John McCain, and Commander James Stockdale. On 1 May 1967, an A-4C Skyhawk piloted by Lieutenant Commander Theodore R. Swartz of VA-76 aboard the carrier USS Bon Homme Richard, shot down a North Vietnamese Air Force MiG-17 with an unguided Zuni rocket as the Skyhawk's only air-to-air victory of the Vietnam War. 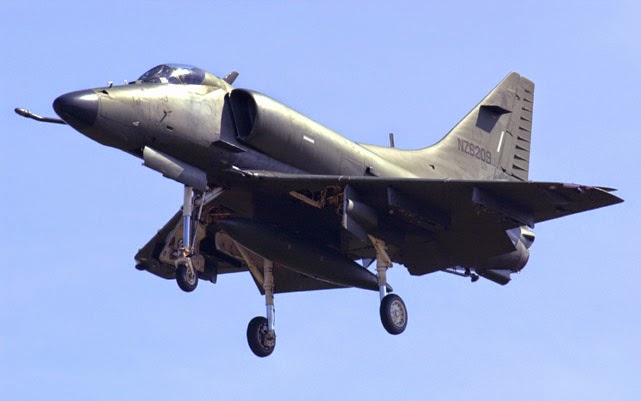 From 1956 on, Navy Skyhawks were the first aircraft to be deployed outside of the U.S. armed with the AIM-9 Sidewinder. On strike missions, which was the Skyhawk's normal role, the air-to-air armament was for self-defense purposes.

In the early to mid-1960s, standard U.S. Navy A-4B Skyhawk squadrons were assigned to provide daytime fighter protection for anti-submarine warfare aircraft operating from some Essex-class U.S. anti-submarine warfare carriers, these aircraft retained their ground- and sea-attack capabilities. The A-4B model did not have an air-to-air radar, and it required visual identification of targets and guidance from either ships in the fleet or an airborne Grumman E-1 Tracer AEW aircraft. Lightweight and safer to land on smaller decks, Skyhawks would later also play a similar role flying from Australian, Argentinean, and Brazilian upgraded World War II surplus light ASW carriers, which were also unable to operate most large modern fighters.Primary air-to-air armament consisted of the internal 20 mm (.79 in) Colt cannons and ability to carry an AIM-9 Sidewinder missile on both underwing hardpoints, later additions of two more underwing hardpoints on some aircraft made for a total capacity of four AAMs. 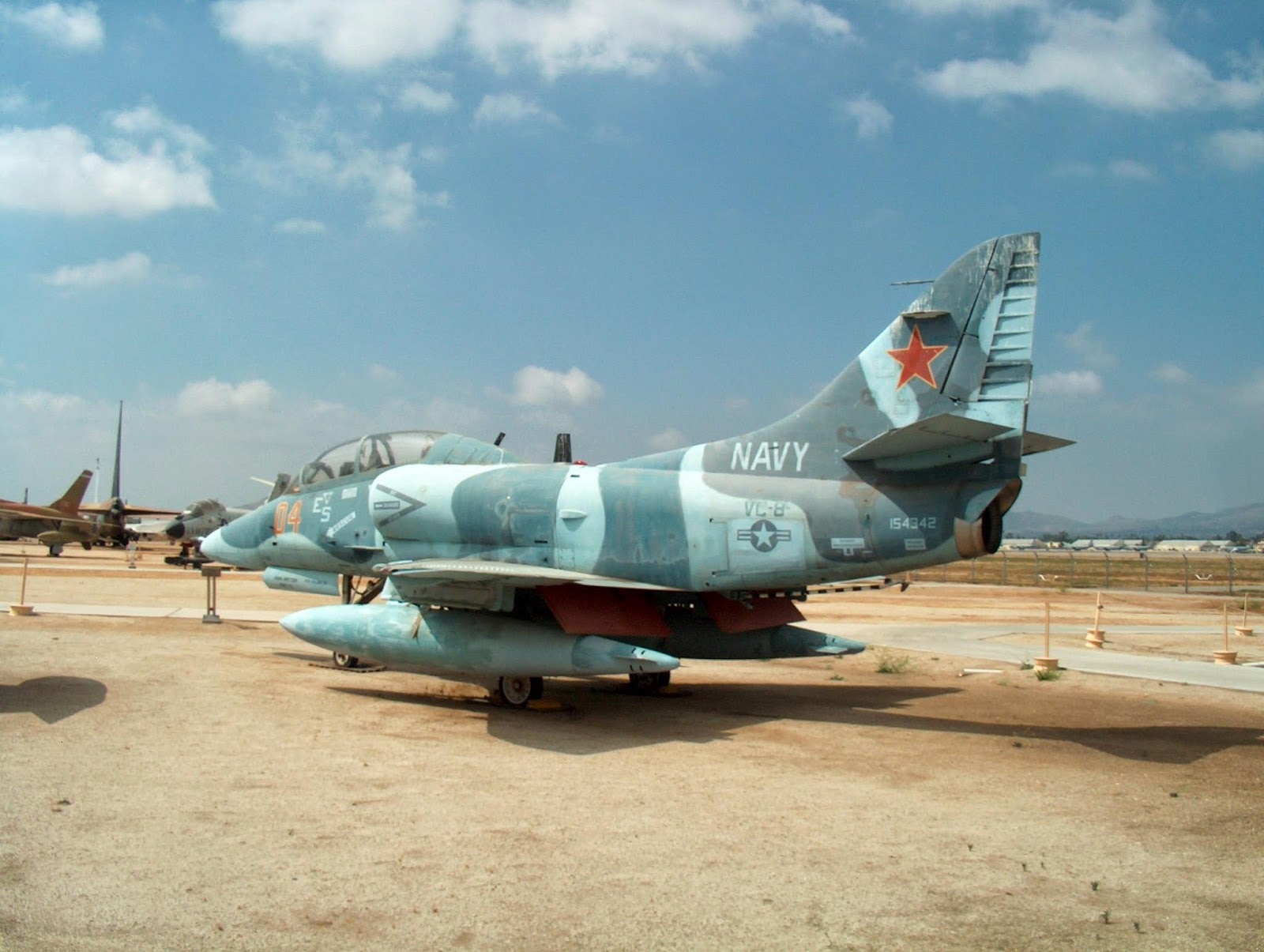 Vietnam Experience:
The first combat loss of an A-4 occurred on 5 August 1964, when Lieutenant junior grade Alvarez, of VA-144 aboard the USS Constellation, was shot down while attacking enemy torpedo boats in North Vietnam. Alvarez safely ejected after being hit by anti-aircraft artillery (AAA) fire, and became the first US Naval POW of the war; he was released from being a POW on 12 February 1973.

The last A-4 loss in the Vietnam War occurred on 26 September 1972, when USMC pilot Captain James P. Walsh, USMC of VMA-211, flying from his land base at Bien Hoa Air Base, South Vietnam, was hit by ground fire near An Lộc. An Lộc was one of the few remaining hotly contested areas during this time period, and Captain Walsh was providing close air support (CAS) for ground troops in contact (land battle/fire fight) when his A-4 was hit, catching fire, forcing him to eject. Rescue units were sent, but the SAR helicopter was damaged by enemy ground fire, and forced to withdraw. Captain Walsh, after safely ejecting, had landed within NVA (North Vietnamese Army) positions, and had become a POW as soon as his feet had touched the ground. Captain Walsh was the last U.S. Marine to be taken prisoner during the war, and was also released from being a POW on 12 February 1973.

Although the first A-4Es were flown in Vietnam in early 1965, the A-4Cs continued to be used until late 1970. The Seabees of MCB-10 went ashore on 7 May 1965. On 1 June 1965, the Chu Lai Short Airfield for Tactical Support (SATS) was officially opened with the arrival of eight A-4 Skyhawks from Cubi Point, Philippine Islands. The group landed with the aid of arresting cables, refueled and took off with the aid of JATO, with fuel and bombs to support Marine combat units. The Skyhawks were from Marine Attack Squadron VMA-225 and VMA-311.

On 29 July 1967, the aircraft carrier USS Forrestal was conducting combat operations in the Gulf of Tonkin during the Vietnam War. A Zuni rocket misfired, striking an external tank on an A-4. Fuel from the leaking tank caught fire, creating a massive conflagration that burned for hours, killing 134 sailors, and injuring 161. 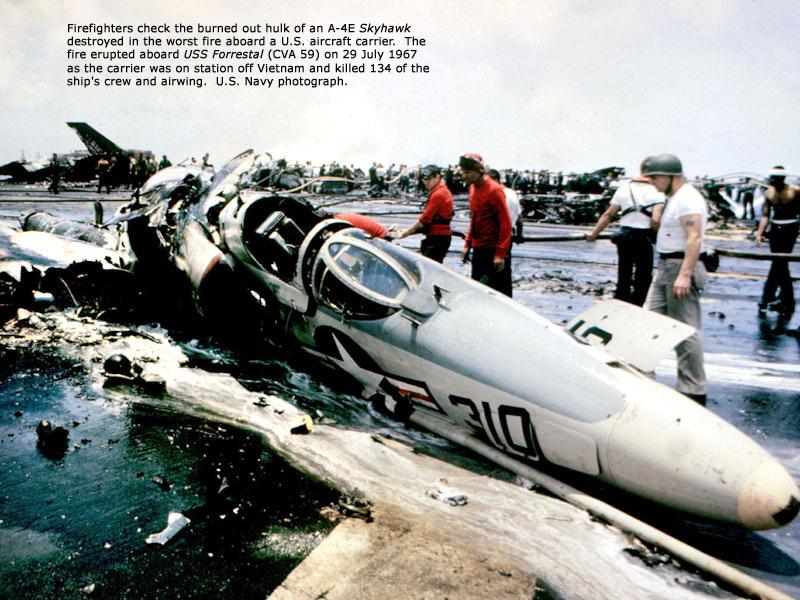 The RNZAF withdrew the Skyhawks from service in 2001 and put them in storage awaiting sale. Draken International signed an agreement with the New Zealand government in 2012 to purchase eight A-4Ks and associated equipment for its adversary training services. The buy was later increased to 11 A-4Ks. These were subsequently relocated to the U.S. at Draken's Lakeland Linder Regional Airport facility in Lakeland, Florida. The other A-4K aircraft were given to museums in New Zealand and Australia or sold to individuals or organisation.
The New Zealand Government has not replaced the Skyhawks. The first of the Royal New Zealand Air Force’s former Skyhawk fleet being disassembled at Woodbourne, near Blenheim, as part of the Government’s decision to place some of the aircraft in museums around New Zealand.
NZ6254, a two-seat TA-4K Skyhawk, has had its protective coating removed and was dismantled into its major components ready for movement by Defence Force transport to the Air Force Museum of New Zealand at Wigram, Christchurch, the birthplace of New Zealand military aviation. 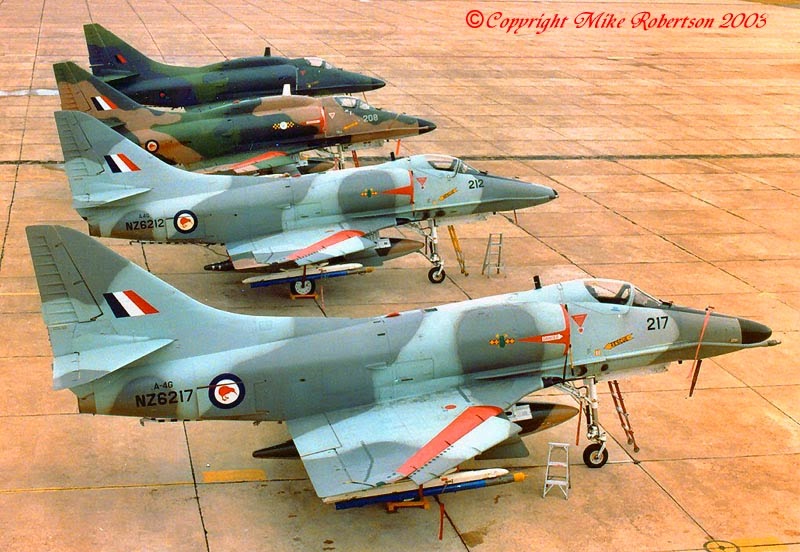 The Museum was very keen to acquire NZ6254 as it was the first Skyhawk to fly in New Zealand following delivery in May 1970 aboard the USS Okinawa. It was also one of two Skyhawks to undertake test-firing of the Maverick air-to-surface missile in 1989, the other aircraft being NZ6205, a single-seat model, which has also been allocated to the Museum. Both aircraft were the prototypes for Project Kahu which resulted in the aircraft fleet receiving a major upgrade to their avionics.
NZ6254 was reassembled at the Museum by the Unit and went on display soon afterwards so that visitors can get the opportunity of seeing the aircraft at close quarters.