IMPERIAL, California. - A military fighter jet has crashed in flames in an Imperial, Calif., neighborhood, according to Miramar Naval Air Station.

Officials said the Harrier pilot ejected and landed safely and that although the plane hit houses, there were no casualties on the ground. Three houses have reportedly been destroyed. 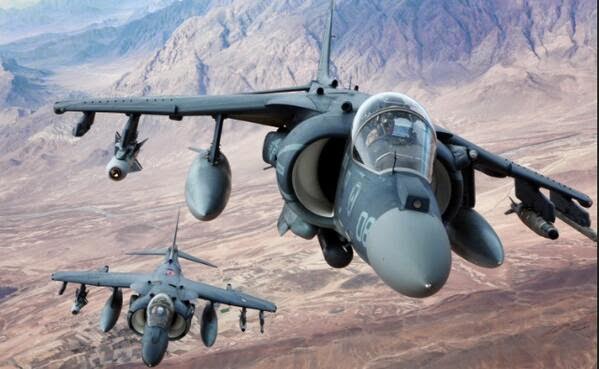 "I was pretty close to it," said witness Shaun Penniman, who was out running with his dog when the aircraft went down. "I heard like a pop and a whistle. And right when I looked up is when I saw the pilot eject."

"It felt like a bomb was thrown in the backyard of the house," said Adriana Ramos, 45, whose home is less than a block from the crash scene. "The whole house moved."

Ramos fled with her 4-year-old granddaughter and 10-year-old daughter, who both cried at the sight outside.

Another witness, Jose Santos, was driving nearby and saw the plane flying "really low." Then "it just fell down," he said.

Santos sped toward the crash site. On the way, he saw the pilot who had parachuted to the ground.

"He didn't look like he was injured. He was rolling from side to side," and a police officer and others were helping him, Santos said.

According to Marine Corps Air Station Miramar, the aircraft was a Third Marine Aircraft Wing AV-8B Harrier that was stationed out of Yuma. The plane went down around 4:20 p.m., local time. Photos from the scene show a large fire after the crash.

This was the second crash in a month of a Harrier jet from the Yuma air base. On May 9, a pilot was able to eject safely before his jet crashed in a remote desert area near the Gila River Indian Community, south of Phoenix. No one was injured.
at June 04, 2014