Avro Vulcan XH558 (civil aircraft registration G-VLCN) The Spirit Of Great Britain was the only airworthy example of the 134 Avro Vulcan V bombers that were operated by the Royal Air Force from 1953 until 1984. Vulcan XH558 served with the RAF between 1960 and 1985 in the bomber, maritime reconnaissance and air-to-air refuelling roles. The RAF operated XH558 as a display aircraft from 1986 until 1992, when budget cuts forced its retirement. It has been grounded since 2013 with a fuel leak and wing problems.

XH558 was retired from RAF service in 1984 but continued flying as a display aircraft until 1992, when the government pulled the plug on funding.  Unlikely to ever fly again, more than a decade later a mammoth restoration effort began to restore it to flying condition.  The Vulcan to the Sky Trust, the charity that owns XH558, raised over £6 million to overhaul the aircraft and secure a license to fly – seemingly achieving the impossible!

In 2007, the mighty Vulcan flew for the first time in 15 years, testament to the incredible work of the Trust and the generous support of fans across the world.  And thanks to a mystery donation the Vulcan has just been saved from likely permanent grounding, but funding is still a grave concern.  The Vulcan celebrates its 50th birthday this year. 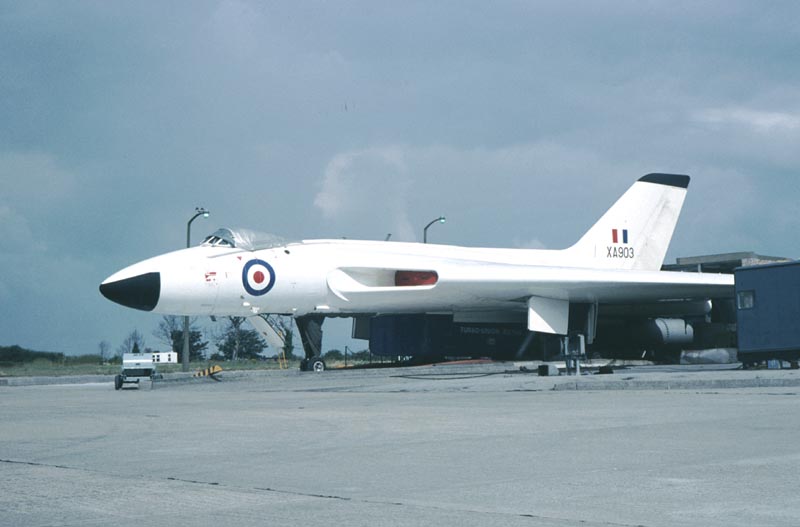 It is operated by the Vulcan to the Sky Trust as a display aircraft, funded entirely by charitable donations and the UK Lottery's Heritage Fund. It is registered with the United Kingdom Civil Aviation Authority as G-VLCN but has an exemption to fly in Royal Air Force markings as XH558.

XH558, was the twelfth Vulcan B2 built, first flew in 1960 and was delivered to No. 230 Operational Conversion Unit RAF at RAF Waddington on 1 July 1960. Almost immediately the aircraft moved with 230 OCU to RAF Finningley where the aircraft spent some eight years before returning to Lincolnshire in 1968. Most of its operational service was with the units of the Waddington Wing including No. 50 Squadron RAF. The aircraft was one of nine converted to a SR2 Maritime Radar Reconnaissance configuration in 1973 and flew with 27 Sqn.

For the maritime reconnaissance role the terrain following radar (TFR) was removed and replaced by LORAN C equipment. XH558 was subsequently one of six Vulcans converted to the air-to-air refuelling variant K2 in 1982. The air-to-air refuelling variant was assessed on 1 May 1982. Go ahead for modification was given three days later and the first aircraft (XH561) made its maiden flight on 18 Jun 1982 and flew to Waddington five days later. XH558 was returned to standard B2 configuration in 1985 and was the last Vulcan in service, largely due to the fact that it had seen little service as a low-level bomber and had spent considerable time grounded while undergoing its various modifications. From 1986 to 1992, XH558 was the RAF's display aircraft, until budget cuts forced it to be grounded again.

After service with the Royal Air Force, the aircraft and most of the RAF spare parts for the Vulcan were sold to C.Walton Limited and delivered by air to Bruntingthorpe Aerodrome on 23 March 1993. The aircraft was kept in a serviceable condition and would undertake fast taxi runs along Bruntingthorpe's main runway. 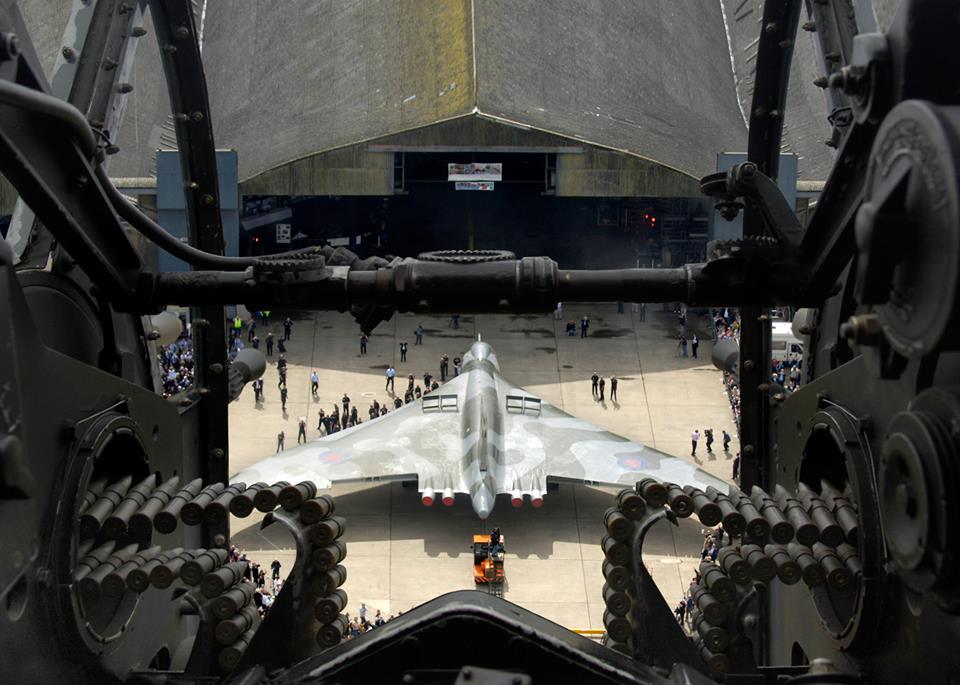 The engineering staff of the Vulcan Operating Company (the engineering arm of Vulcan to the Sky Trust, owners of XH558) worked to return Vulcan XH558 to flight, with the first test flight taking place 18 October 2007. They were supported by the "Vulcan to the Sky" club, a supporters and fundraising organisation. Though the website carried an announcement on 1 August 2006 that the project was in danger of being abandoned due to lack of finance,  the target of raising the remaining £1.2m was achieved on 31 August 2006, thanks to a high-profile publicity campaign orchestrated by the supporters club, Vulcan to the Sky Club (formerly Vulcan 558 Club). Time had almost run out for XH558 when Sir Jack Hayward, a British philanthropist, donated £500,000, which topped off the £860,000 already raised by Vulcan to the Sky Club and Friends. Although the aircraft restoration was nearly complete, the aircraft was not ready for the flypast down the Mall in London for the 25th Anniversary of the Falklands conflict on 17 June 2007 or the RAF Waddington Airshow and the Royal International Air Tattoo (RIAT).

It was intended that the Vulcan would fly during at least one UK airshow during the 2007 season. but due to delays in returning the aircraft to flight, mainly down to delays in the return of refurbished flight-critical components, the aircraft was not ready for the display season.

On 16 August 2007, the aircraft started engine testing on the airfield at Bruntingthorpe. On the next day, XH558's No.3 Rolls-Royce Olympus 202 jet engine was run for the first time in over 20 years. This is a different engine from that used by XH558 during its final season with the RAF's Vulcan Display Flight in 1992, with all four of the Vulcan's original Olympus 202 engines having been replaced by zero-hour units which had been stored since 1982. The VTS Team also has another four fully inhibited engines in stock. The removed engines were either scrapped, sectioned for display or passed on to VRT's XL426 at Southend. Another milestone in the restoration project was achieved on 22 August 2007, when all four of XH558's Olympus engines were run at nearly full power settings, for short intervals. The first post-restoration flight, which lasted 34 minutes, took place on 18 October 2007.

On 14 April 2008, the Vulcan flew from Bruntingthorpe to RAF Cottesmore to have a Compass swing and test flights. Whilst in mid air the plane called Mayday after believing the Auxiliary power unit (APU) was on fire. It landed safely at Cottesmore and the cause was later discovered to be an electrical fault.

On 16 April, a further two-hour test flight was planned to perform "straight line testing" of avionics. The flight was scheduled to go between Cambridge and Marham, but this was abandoned when one of XH558's undercarriage doors failed to close due to an electrical micro-switch malfunction and the aircraft made a safe return to Bruntingthorpe Airfield.

On 9 June 2008, XH558 flew its final test flight and was granted on 3 July, by the CAA, its Permit to Fly at 1605. At 1705, it launched for RAF Waddington where it flew its airshow routine, in front of Civil Aviation Authority of the United Kingdom examiners who then issued its DA (Display Authorisation) for the RAF Waddington airshow in the first week of July.

On 29 March 2011, XH558 landed at its new home Robin Hood Airport Doncaster Sheffield. This location is the former RAF Finningley airbase where XH558 was previously based for 8 years during the 1960s. The aircraft will be stored and maintained in the hangar that previously provided the same maintenance workshop nearly 50 years earlier.

The longer-term aim is to make the authorised modifications that will allow fatigue life to match expected engine life, with both expiring at about the same time in the period 2013 to 2015, depending on Fatigue Index usage and engine cycle usage.

A serendipitous arrangement in air intakes causes some Vulcan airframes to emit a distinctive "howl" when the engines are at approximately 90% power. This noise is produced by XH558, and is a popular feature of its flypasts at public airshows.

As the aircraft operates under visual flight rules (VFR) it cannot fly through cloud to higher altitudes where turbulence is lower, as this would require instrument flight rules (IFR) certification. Flying VFR in lower, often turbulent, air adds to airframe fatigue and this increases fatigue-index (FI) consumption. In 2010 the aircraft was therefore limited to between 30 and 40 hours flight-time, to help reduce FI usage and preserve the airframe. As a result, the number of air show appearances were fewer than in 2009. Some two-day fly-in shows were limited to just one appearance, with the first day being given preference to allow the second day to act as a reserve in case of technical or weather difficulties

After extensive servicing over the 2011-2012 winter, XH558 had its CAA certificate renewed in April 2012, in time to perform a flypast at the dedication of the Falklands Memorial at the National Memorial Arboretum on 21 May.
During take off from Robin Hood airport for a practice flight on 28 May, both port engines failed. The failure was attributed to ingestion of silica gel desiccant bags. Damage sustained was limited to the engines and no structural damage was found. Both port engines were deemed beyond repair and replaced with engines in the trust's stocks. The aircraft was returned to flight for the 2012 Farnborough International Airshow, and has subsequently displayed throughout the 2012 season. 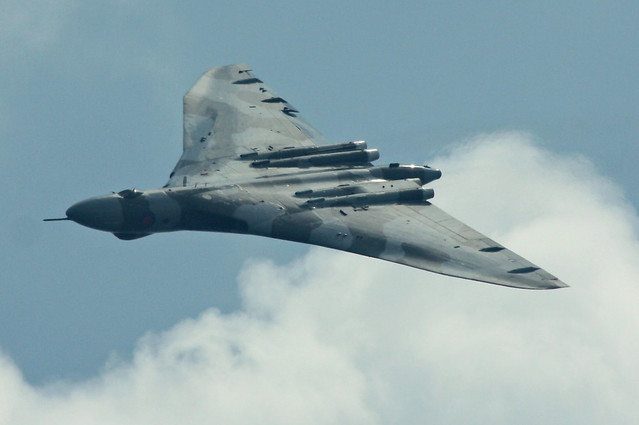 2013
On 12 October 2012, it was announced by Vulcan To The Sky that 2013 was likely to be the last flying season for the Vulcan, six years after her first post restoration flight.

Reasons cited for the decision to end flight are due to the Vulcan requiring complex wing leading edge skin reinforcement, and a lack of spare engines after the incident in May 2012 when two engines were damaged beyond repair and the last working spares were used to replace them. However, on 25 January 2013, it was announced that wing modification investigations have begun after having contracted Cranfield Aerospace, who would extend her flying period beyond 2013.

It was featured at the RNAS Yeovilton's Air Day in July 2013. Later on in the year, it was confirmed that the wing modification was viable and a fundraising campaign referred to as Operation 2015 was launched. With sufficient funding raised, the modifaction was enacted, and in March 2014 the necessary modification was completed, extending XH558's flying hours.